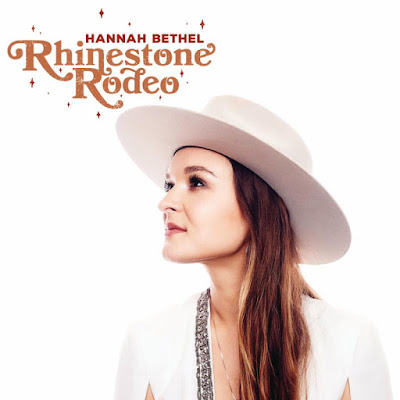 "Hannah Bethel is equal parts vulnerability and strength, which makes her a force to be reckoned with in country music. The seemingly simplistic melody of her new song, 'Rhinestone Rodeo,' only enhances the more complicated and emotional ties that come when pursuing a risky chase, as the storyline suggests. With three female powerhouse writers (Bethel being one) behind the ballad, the slowly disappearing art of eloquently painting a detailed picture reemerges as a must in today's listening world. Not to mention the attraction of Bethel's effortless and easy listening vocals. Look this girl up---she is a game changer!" - Lindsey Sipe, The Country Note

Independent Country/Americana recording star Hannah Bethel releases "Rhinestone Rodeo" to radio today. Increased demand from programmers for the single comes hot on the heels of wrapping the first 16-show leg of her national tour - and as the emotional and heart-tugging music video for "Rhinestone Rodeo' gathers steam at CMT Music and The Country Network.

"Rhinestone Radio" is available to Country and Americana broadcasters at CDX Nashville and fans can listen to the single here.

Critical acclaim and fan reaction for "Rhinestone Rodeo" has been very strong since the music video was recently premiered by both Billboard and CMT Music. Billboard stated "Bethel's ethereal vocals and universal storytelling are at the heart of her new song 'Rhinestone Rodeo,' a tale about chasing her dreams and never giving up." CMT extolled that "Bethel exudes some solid country wisdom made famous by Dolly Parton in her latest release 'Rhinestone Rodeo.' Both believe life is sweeter when you have an attitude of gratitude, and each has a knack for turning adversity into works of art." The Boot named "Rhinestone Rodeo" one of 10 New Songs You Need To Hear and it is included on several playlists, including Spotify's CMT Music and CMT Next Women of Country and on Apple Music CMT Next Women of Country.

"I am so excited and grateful for the way that 'Rhinestone Rodeo' has been received so far," says Bethel. "I am thrilled to be sharing it with my friends at radio!"

Bethel's "Rhinestone Rodeo Tour" has won her rave reviews to date as she has crisscrossed America performing in The Great Smoky Mountains, New York City, Connecticut, Colorado, Kentucky, and multiple concerts in Alaska and in her hometown of Nashville. From solo acoustic performances at glamping destination Under Canvas and New York City's famed Rockwood Music Hall, to full band shows at influential Indie Rock, Americana and Country clubs including The Basement, 3rd & Lindsley and The Wildhorse Saloon in Nashville, to Tidball's in Bowling Green (once described by David Fricke in Rolling Stone magazine as the city's "long-running equivalent to CBGB," the New York City music club where groups like the Ramones, Blondie and Talking Heads got their start), and festival shows on the coast of Valdez, Bethel is winning the hearts of fans across multiple genres and varied musical tastes. She also garnered glowing quotes from several talent buyers on the tour that speak volumes about her live performances:


"You can hear her love and desire to perform in each note sang by her soothing but powerful voice. On her first show with us, Hannah joined a lineup that boasted of some the most respected female artists of the Nashville and South Central Kentucky region. She held her own and along with her three-piece band behind her, demanded the crowd's attention instantly. We hope to make the legendary Tidball's a home for Hannah and a gateway to the North for her future tours."
- Brian Jarvis, owner, Tidballs, Bowling Green, KY


"We were pleased to launch our Acoustic Campfire Music Series with Hannah Bethel as our first artist at our Great Smoky Mountains location this summer. Hannah's warm and friendly personality and intimate yet powerful performances strongly connected with our guests."
- May Lilley, VP Marketing for Under Canvas

"Hannah's confidence, exuberance and sheer musicality on stage are indicative of an artist who has put in the time required for her craft. She provides a shining example to those thinking about delving into a career in music. Hannah Bethel is badass."
- Mike Grimes, co-owner, The Basement, The Basement East, Nashville, TN

"Everyone loved Hannah and her band! Her shows were fantastic."
- Laurine Regan, Events & Marketing Coordinator, City of Valdez, Alaska

Between tour dates Bethel also made multiple appearances on WSM 650 AM Radio, and has been featured by The Country Note, Nashville Access, Think Country, NY Country Swag and others.

Bethel will resume her "Rhinestone Rodeo Tour" in August. Stay current with her latest touring updates at https://www.hannahbethel.com

Posted by LovinLyrics at 3:21 PM