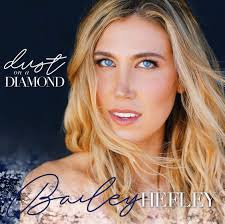 Growing up in Little Rock, AR one of Bailey Hefley's first memories was telling her mother that she wanted to be a country singer. Making this dream a reality would be a challenge as she suffered debilitating seizures as a small child. She didn't let this get in her way and began performing at a very young age. A mentor/student partnership singer songwriter Bobby Pinson led to her focusing more on songwriting and she moved to Music City for good in 2012. She then began working with Jamie O'Neal who helped produce her new EP So.That.Girl. Bailey describes the EP as a "roller coaster ride of love." The six-song offering, all of which Bailey co-penned, is about finding love—and all the ups and downs that come with it. The EP's lead single "Dust on a Diamond" tackles a failed relationship that Bailey hopes can comfort other young women who have found themselves in similar circumstances.


Find out more about Bailey Hefley at baileyhefley.com
Posted by LovinLyrics at 6:17 PM