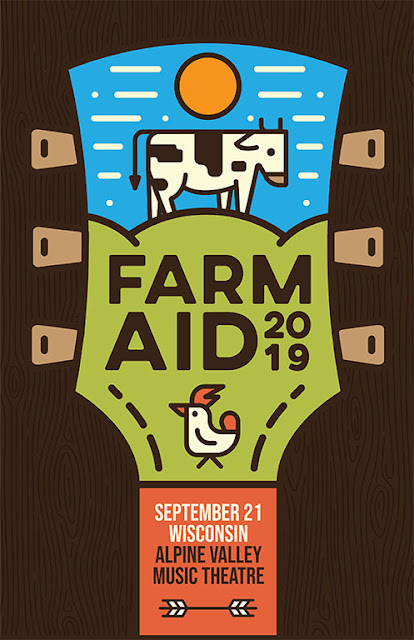 Musical icon Willie Nelson’s groundbreaking festival for a cause Farm Aid returns to AXS TV, as the network presents a special live broadcast of Farm Aid 2019 on Saturday, September 21, from 7:30pm to 12:30am ET. This unforgettable five-hour event marks the sixth consecutive year that AXS TV will air Farm Aid, and the fifth year that the network will air the festival live.

(Editor’s Note: The 2019 broadcast will immediately repeat after its initial airing.)

Now in its 34th year, Farm Aid comes to the Alpine Valley Music Theatre in East Troy, Wisconsin, for the first time in the festival’s history, as some of music’s biggest names take the stage to raise awareness for America’s family farmers. Farm Aid’s festival to rally public support is especially critical now as farmers face another year of farm income slashed by half, which has caused a farm crisis similar to the one that sparked Farm Aid’s start in 1985. The Farm Aid 2019 lineup puts the spotlight on an eclectic blend of iconic trailblazers and modern favorites, headlined by GRAMMY-winning superstar and Farm Aid founder Willie Nelson. Other highlights include Nelson’s fellow board members John Mellencamp, Neil Young, and Dave Matthews (performing with Tim Reynolds), as well as Margo Price, Tanya Tucker, Luke Combs, Brothers Osborne, Nathaniel Rateliff & The Night Sweats, and Lukas Nelson & Promise Of The Real and Yola, among others.

As part of this landmark broadcast, AXS TV has compiled a block of candid conversations and classic concerts celebrating Farm Aid mainstays Nelson, Young, Mellencamp, and Matthews that will air earlier on Sept. 21. The day-long event opens at 9:00am ET, as John Mellencamp storms into the Windy City to share priceless stories and perform signature songs such as “Small Town,” “Pink Houses,” “Cherry Bomb,” and more in Plain Spoken: John Mellencamp. Next, at 10:30am ET, experience the best moments from the Dave Matthews Band’s 2005 set at the legendary Red Rocks Amphitheatre, featuring enduring hits such as “Crash Into Me,” in the 2005 concert compilation Dave Matthews Band: Weekend On The Rocks. Then, at 11:30am ET, Willie Nelson sits down with Dan Rather to discuss the history and impact of Farm Aid, and the state of marijuana in America on The Big Interview, before blazing through an intimate career-spanning set that includes “Whiskey River,” “Trouble In Mind,” and “Just Because You Asked Me To,” in Willie Nelson: Soundstage at 12:30pm ET.

The day continues at 1:30pm ET, as Dan Rather joins Neil Young for a wide-ranging conversation covering his fight against corporations, his childhood bout with polio, and his own mortality; followed by an encore broadcast of Plain Spoken at 2:30pm ET. Then, at 4:00pm ET, John Mellencamp opens up about his acclaimed career, his passion for painting, and the current political landscape. The block comes to a close with encore presentations of Dave Matthews Band: Weekend On The Rocks at 5:00pm ET, and Willie Nelson: Soundstage at 6:00pm ET, leading into the live broadcast of Farm Aid 2019 at 7:30pm ET.