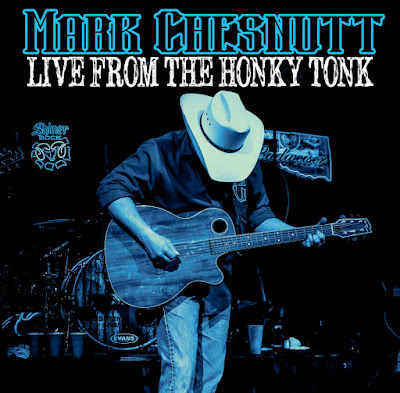 Nearing three decades in the music business, Mark Chesnutt, one of country music’s finest stylists and a traditional mainstay, is set to introduce his very first vinyl LP—LIVE FROM THE HONKY TONK (Nada Dinero Records) — Tuesday, October 15, 2019. Produced by Chesnutt and pressed on 180g vinyl, the 12 sides showcase live performances of the string of hits that brought him to the dance in the 90s (“I’ll Think Of Something,” “I Just Wanted You To Know,” “Ol Country” and “Too Cold At Home”) along with country music standards, fan favorites and medley tributes to George Jones (“The Race Is On”/”White Lightning”) and Waylon Jennings (“Clyde”/”Are You Sure Hank Did It This Way”/”Good Hearted Woman”).

“We’re in a day and time where the ‘old is new’ again. It’s hard to believe, after all these years, we’re releasing my music on vinyl,” Chesnutt said. “Back when I was signed, labels were far and away from producing music on vinyl. I think, joining loyal country music lovers, the new age listeners have a growing appreciation for the ‘raw and the real’ live sound—like being right there in the room—and, I for one, am right there with ‘em.”

Continuing to carry the torch in the footsteps of George Jones and Waylon Jennings, Mark Chesnutt’s signature voice has shaped the music of today’s country music newcomers and the new country music generation. Chesnutt plays nearly 100 dates a year canvassing the country. He has four platinum albums, five gold albums, 14 No. 1 singles and 23 Top 10 singles to his name. The two-sided vinyl LP, LIVE FROM THE HONKY TONK, is his 18th album release, second live recording project and first on vinyl; it will be available through Chesnutt’s online store (https://markchesnuttshop.com) and for purchase at his shows. ($20/$30 for autographed copy)

For more information on Mark Chesnutt, visit: www.markchesnutt.com.
Posted by LovinLyrics at 3:45 PM