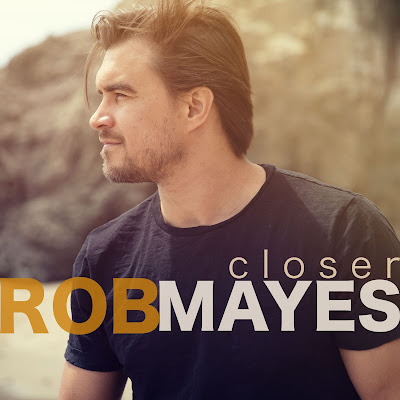 Country artist, Rob Mayes, has released his debut EP, Closer, which is now available through all streaming platforms and digital retailers. Mayes has had a busy year thus far, traveling between Nashville and L.A. recording new music and writing, while also acting in films that are soon to be released including “The Road Home For Christmas” and “A Soldiers Heart.” Mayes has been looking forward to releasing his debut project and says, “I wanted to share another one of my arts with the world. A friend. Another craft. A craft and art that to me, is the most important; one that’s kept me sane and offered solitude. That has provided me with strength in lonesome, sad, and doubting times. There’s something much more that can be conveyed with words and a melody, and a key, and a tempo and progression. It’s a universal language. And I hope people understand it and I hope that it might inspire. This is just the beginning.”

Closer includes seven tracks, all co-written by Mayes, that together shed light on Mayes’ influences and the canvas of his sound. When creating music, Mayes draws from an array of influences from his classical upbringing on piano to the country tracks he listened to as a kid riding shotgun in his dad’s truck. Having written countless songs ranging from pop to jazz, Mayes pulled from these influences to create an album that has a little something for everyone, complete with ballads, mid-tempos and upbeat tracks. “This album includes upbeat songs, songs of truth and feeling, songs of pain and happiness, the fun in ‘Kiss The Night,’ the flirtation of ‘Closer,’ the self-reflection of ‘Road With No Lines,’ vulnerability in ‘All It Takes,’ defiance of ‘Prospector,’ the uncertainty and tension and sadness in ‘Close My Eyes,’ the importance of faith and trusting in ‘We’ll See.’ These are the themes that I write about. They are universal. They are in me, and they are in all of us,” explains Mayes. Fans may recognize the track “All It Takes” from ABC’s “Mistresses” in which Mayes was a series regular.

In addition to Mayes’ new music, fans can also expect to see him this holiday season in the new Lifetime film, “The Road Home For Christmas,” set to premiere Oct. 26 at 8 pm ET on Lifetime. The film is part of the “It’s a Wonderful Lifetime” holiday campaign which will run from Oct. 25 to Dec. 25. Throughout this time, Lifetime is set to premiere 28 original films to celebrate the season. For more information on Rob Mayes, please visit https://www.rob-mayes.com
Posted by LovinLyrics at 9:48 AM