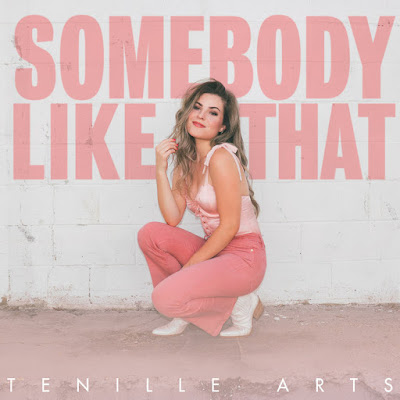 The sold-out Grand Ole Opry audience heard it first, and now Tenille Arts’ new single and music video, “Somebody Like That,” is available for all to see and hear on Reviver Records. Tenille wrote the upbeat song with Alex Kline and Allison Veltz. Kline also produced the single.

“Alex, Allison and I wrote ‘Somebody Like That’ about reflecting on the love we grew up around with our parents and grandparents,” said Tenille. “It’s the kind of love we all daydream about and want to find.”

The single has already been added to massive official Spotify playlists New Boots, Wild Country, All About Country and others, and YouTube Music featured it on the cover of Country’s New Crop. Apple Music, Amazon Music and Pandora are already on board, giving Tenille the heaviest support of her career.

The “Somebody Like That” music video was produced by Wes Edwards and directed by Stephen and Alexa Kinigopoulos. Tenille was stunningly styled by Krista Roser and Mariah Galston for the clip, and Marz Collins georgeous hair and make up for the busy day of shooting. The clip will begin airing on CMT and other video outlets in the coming weeks.

Tenille heads west this week for dates in Colorado Springs on October 3, Fort Collins, CO on the 4th and Albuquerque on the 5. She will make her first trip across the pond for two performances at Bush Hall in London on October 27. The first is a noon appearance as part of C2C Presents: Country Hits Radio Hub followed by an 8 p.m. C2C Country Music Week Bluebird Cafe Nashville in-the-round with Phil Barton and Emily Hackett. After a day off, Tenille travels to Germany for dates in Cologne, Berlin and Hamburg October 29 – November 1.

Born and raised in the small prairie town of Weyburn, Saskatchewan, Tenille Arts picked up the guitar and penned her first song at age 13 and has been performing across the US and Canada ever since. She made her first appearance on The Bachelor in January 2018 singing her original song “Moment of Weakness.” The performance resulted in a record deal with powerhouse indie label Reviver Records. She made her second appearance on the show in January of this year performing “I Hate This.” The song hit #1 on both the U.S. and Canadian iTunes Country Charts and #9 U.S. iTunes all-genre following the episode.

Tenille has released an EP and a full-length album, and her music has tallied over 25 million streams. Noted music critic Tom Roland was so moved by her music that he has penned three full-page features in the Billboard Country Update. Music Row Magazine critic Robert K. Oermann called Tenille "Promising in the extreme." Streaming giant Pandora named her one of their new artists to watch, and CMT included her in their “Ten Must-See Indies You Need to Know,” a video discovery program that spotlights rising independent artists and established artists from independent labels. Rolling Stone named Tenille one of their “10 New Country Artists You Need To Know,” calling her “An edgy, Fearless-era Taylor Swift with crystalline vocals; ideal for hopeless romantics who are fire signs,” and PopCulture.com named her one of their "Country Artists to Watch in 2018."
Tenille made her Grand Ole Opry debut on September 21, 2019.

To learn more about Tenille Arts go to www.tenillearts.com