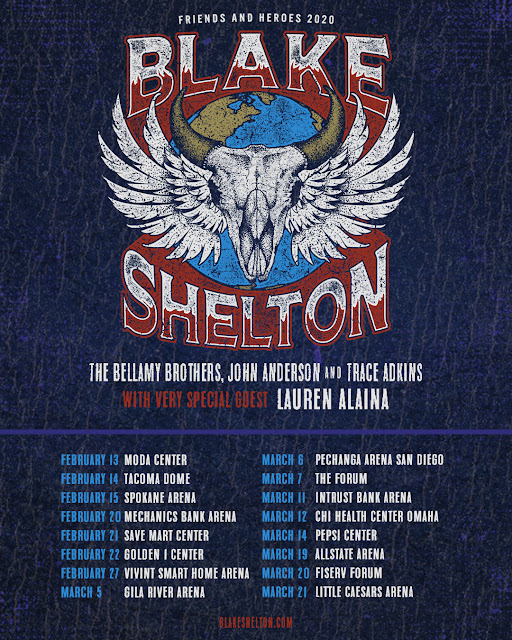 Blake Shelton championed his friends and heroes like The Bellamy Brothers this year more than ever, from sharing singles to sharing stages – and he’s not done yet! The arena-selling, multi-media entertainer will hit the road once again for “Friends and Heroes 2020” beginning Thursday, February 13 in Portland, Oregon. The 16-date run will hit major cities throughout the Midwest and West Coast, including a stop at The Forum in Los Angeles (full list below). Joining him is very special guest Lauren Alaina as well as The Bellamy Brothers, John Anderson and Trace Adkins.

“The Friends and Heroes Tour was so exciting and successful last year that I couldn’t imagine not trying something like that again,” said Shelton. “Even though every night when the show wrapped, I would tell the audience that they might never see something like this again, with these legends, my plan all along was to at least try to make that happen. I didn’t know if I’d be able to get the same artists, but we were able to work it out where we have the Bellamy Brothers, John Anderson, Trace Adkins and Lauren Alaina all coming back to do the exact same tour. We were only able to do a handful of shows last year, so we’re going to take the tour to different areas so that fans will get a chance to see what we did. I feel like it was the best concert experience that I’ve ever been involved in, and I’m ready to get fired up again.”

Tickets in all cities, apart from Los Angeles, Wichita and Detroit, will go on sale October 25 at 10:00 a.m. local time. The three remaining shows will go on sale at the same time the following week on November 1. Visit blakeshelton.com for links to buy. A limited number of exclusive VIP Packages will be available. These exclusive offers can include an amazing selection of tickets, backstage tours, access to VIP hospitality lounge, preferred parking, custom merchandise and much more.

In addition to announcing the tour, Shelton is reminding the world that “Jesus Got a Tight Grip” in his brand new song (listen HERE). The seasoned songwriter penned the track alongside frequent collaborators Chase McGill, Jessi Alexander and Rhett Akins. The upbeat tune celebrates the goodness in everyone, even those who might “have a little rust on [their] halo[s].” “Jesus” is available today and comes accompanied with a live video that features his touring band, including CMA Musician of the Year nominee Jenee Fleenor (watch HERE).

The project’s title track, three-time CMA-nominated smash “God’s Country,” is the fastest country single in the past year to reach one million track equivalents. It is nominated for Video, Single and Song of the Year. The smash hit became Shelton’s 26th No. 1 on country radio, where it remained for a multi-week run, in addition to his 16th No. 1 on the Billboard Hot Country Songs chart. Shelton also earned a Musical Event of the Year nomination for “Dive Bar,” his collaboration with music icon Garth Brooks.

Between putting the finishing touches on Fully Loaded: God’s Country, Shelton has a few select tour dates and is currently filming for the next season of The Voice. Live shows begin November 11. 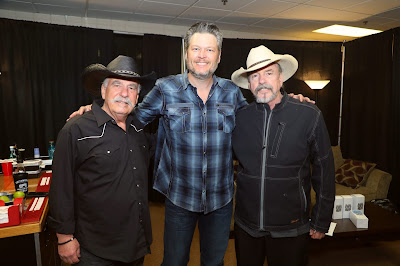