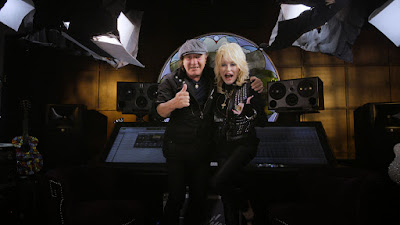 Brian Johnson heads to the country music capital of the world, Nashville, TN, to talk with genre trailblazer Dolly Parton on an all-new episode of AXS TV’s globetrotting music series Brian Johnson’s A Life On The Road—airing Sunday, November 10 at 9:00 pm ET.

In this exclusive first-look, Parton sheds some light on the history behind her enduring hit single “I Will Always Love You”— which Parton wrote following a heated fight with her longtime professional partner and mentor, the late Country icon Porter Wagoner. “I went home with a heavy heart, and I wrote ‘I Will Always Love You’,” Parton explains. “I went back to Porter and said, ‘You won’t listen to what I’m saying, please sit down and listen to this song.’ He started to listen to it and I started playing it with my guitar, and he started to cry. He said, ‘Ok, you can go, if I can produce that song.’” The single ultimately made its way to the top of the Country charts, and attracted the attention of the The King himself, Elvis Presley, who wanted to record it.

Unfortunately, the cost would be too great for Parton, who would have been forced to concede half of the publishing rights to Presley’s team. “I grieved over that,” she continues. “I just cried my heart out, ‘cause I was just picturing Elvis singing that. Can you imagine?” The decision would prove to be the correct one, however, after the single was turned into an international sensation by one of music’s most powerful voices. Parton concludes, “After Whitney Houston recorded it, I was so glad I kept the full publishing! I wrote ‘Jolene’ and ‘I Will Always Love You’ the same night, and I thought, ‘Buddy, that was a good night!’”


Brian Johnson’s A Life On The Road airs every Sunday at 9:00pm ET only on AXS TV.
Posted by LovinLyrics at 5:10 PM