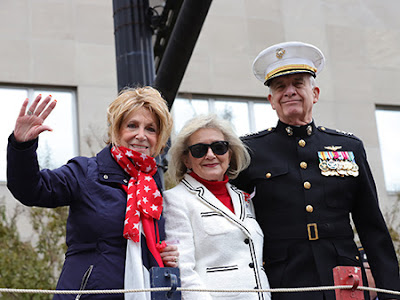 The Davidson County Veterans Coordinating Council honors the military Veterans, offers thanks to all military personnel who served the United States in all wars and serves as a meaningful reunion of Tennessee Veterans and thousands of supporters who attend the event each year showing appreciation of the individuals who served in the military.

"I was so proud to participate in the Veteran’s Day Parade in Nashville as the music Co-Grand Marshal. I am very proud to continue the tradition of my friend Jan Howard, who held this position for many years as a Gold Star Mother," shared Jeannie Seely. "I honor her today along with all who served in the military and those who sacrificed at home. God Bless the USA!"

“It was a pleasure to join with Jeannie as Co-Grand Marshals for this year’s Veterans Parade. Both of us were born and raised in rural America where the love of country and support of those who serve is strong,” stated LTG (ret) John Castellaw, USMC. “Today we were able to give back a little of that love and support by saluting those veterans marching down Broadway.”

Veterans Day (originally known as Armistice Day) is a federal holiday in the United States observed annually on November 11, for honoring military veterans that have served in the United States Armed Forces (and were discharged under conditions other than dishonorable). It coincides with other holidays including Armistice Day and Remembrance Day which are celebrated in other countries that mark the anniversary of the end of World War I. Major hostilities of World War I were formally ended at the 11th hour of the 11th day of the 11th month of 1918, when the Armistice with Germany went into effect. At the urging of major U.S. veteran organizations, Armistice Day was renamed Veterans Day in 1954.