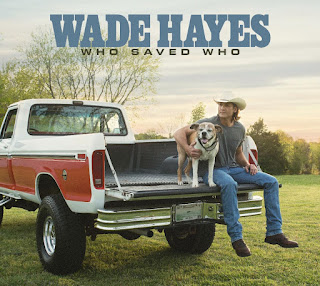 Wade Hayes originally wrote “Who Saved Who” as a tribute to his dog, “Jack,” who helped him get through two bouts of cancer several years ago. The touching song is now the title cut to a long-awaited album that was released today, Friday, December 13, 2019. The 10-song collection follows his is 2017 Old Country Song album and is currently available on Conabar Records at WadeHayes.com.

“This whole project stemmed from the title track ‘Who Saved Who,’” said Wade. “I first played it on The Country Music Cruise with no intention of recording it – it was just a personal song about my dog. The reaction was the same every time I played it, and I and realized I need to record it! This song will always be special to me, and I hope everyone will enjoy listening as much as I did making this latest record.”

Regarding the title track, Wade met his dog Jack eight years ago at a gas station around midnight 75 miles outside of Nashville. He recalls the skinny dog was full of ticks and had holes in him. The folks at the station told Wade the dog had been there for several days, and no one had claimed him. “This rundown dog jumps up in the front seat of my pickup truck and sits down. He had a pizza crust hanging out of his mouth. He jumped up in the seat like, ‘OK, I’m ready to go,’ just comfortable as could be,” Wade told Billboard Magazine.

Wade brought back several heavy hitters from his very first album, including drummer Lonnie Wilson, to knock Who Saved Who out of the park. “I’ve worked with Lonnie as a drummer and songwriter off and on throughout my career, and he joined me on this project.”

Hayes wrote two of the cuts on Who Saved Who solo and co-wrote six with the likes of Roger Springer, Monty Holmes, Jake Worthington and Ward Davis. Radney Foster and George Ducas wrote “Just Call Me Lonesome,” and Phil O’Donnell, Casey Bethard, Don Sampson wrote “Behind This Guitar.” He recorded a touching cover of Third Day’s “Revelation” to wrap up the album.