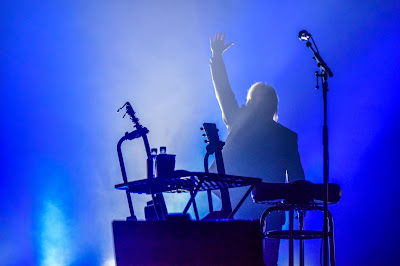 One of country music's biggest icons, Travis Tritt, brought his acoustic tour to the Roanoke Rapids Theater in Roanoke Rapids, NC on Saturday, January 18. This was by far one of the best shows I have ever had the pleasure to review, not only from a media perspective, but through the eyes of a fan. This show was a bucket list check mark for me, having been a huge fan of Travis and his music from day one. I've never had the chance to see him until now and I can't even begin to tell you the level of excitement I had leading up to this show. To put the cherry on top, this was an acoustic show, just Travis and his guitar. Those shows are the best because you not only get the music, you get the stories, emotion and the memories that go along with it. I wish I had been able to secure an interview and have a few minutes to talk with Travis before the show, to be able to simply thank him in person for the years of smiles he's brought to my face and to get his perspective on today's industry and how to help up and coming artists and share that with you, but unfortunately I wasn't able to get a final approval, but you can be sure it wasn't for lack of trying.

First, I need to say thank you to Julie and Allison of BarnBurner Promotions. I've dealt with many promotion teams over the past ten years while attending and reviewing shows at various venues and these girls deserve a pat on the back for the handling of this sold out show. I watched how they handled the "day of show" aspects from the ticket booth, the concession area, the merchandising area, the beer tables, the stage area, interaction with the patrons and their assistance of Travis and his band. This went off perfectly from what I observed - there was no obvious stressing out, no running around looking like things were out of control like you see at a lot of shows. These girls know their stuff and they handled it like true professionals. I always enjoy working with them and after a brief absence, am very glad to see them back in the game. I know when they're at the helm, it's always gonna be a great night. They're also so pleasant to deal with. They really are a huge asset for the Roanoke Rapids Theater.

The venue itself is always such a great place to see a show. It's a beautiful theater, with a huge accommodating lobby, an upstairs dining area, great selection of food and beverages (both non-alcoholic and "over 21."), the restrooms are always clean, parking is more than sufficient and the staff is always very kind and easy going. The seating area is not too large, but not too small. It's the perfect size for a comfortable crowd with cushioned theater seats. The front row seats are not pushed right up against the stage like a lot of places, the stage is the perfect size and it's just comfortable. There are also VIP booths available for special guests and groups.

Finally it was showtime. The lights went down, the magic began ...

Travis took his seat on his stool and started 2+ hours of some of country's best music and most memorable songs. He had only one request and that was when he played a song that was a crowd favorite, please sing along as loud as you can. I also had one request for those around me, don't talk through the show or be on your phones. It's not only disrespectful to those around you who paid money or drove a long distance to listen to the artist, but when you're in the front row, it's even more disrespectful to the artist because they can see you much better than if you were 10 rows back and sends the message that you're not interested. Save your conversation for either before or after the show and keep your texting to a minimum. It's just common courtesy. 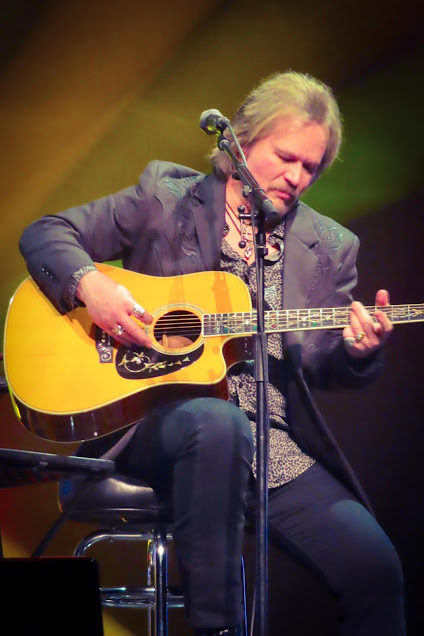 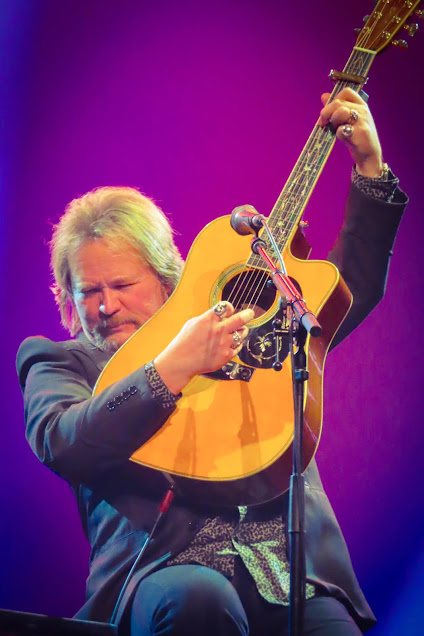 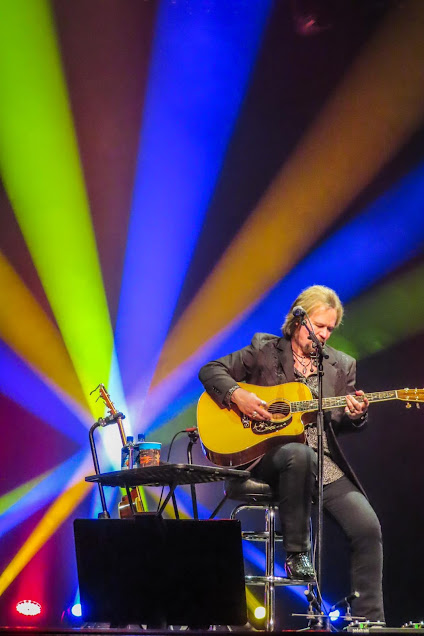 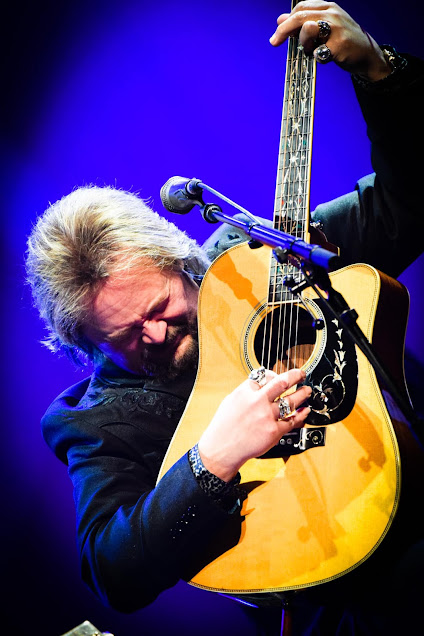 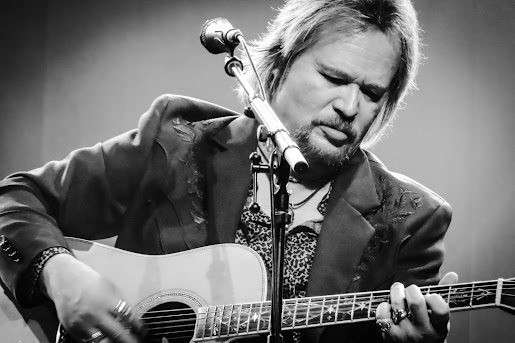 He brought the house down with a GREAT set list, not leaving much of anything out and adding in some that we weren't expecting. He accompanied each song with a retrospective video to compliment the tune. His stories included:

- His childhood memories of his parents and listening to the Grand Ole Opry on the radio.

- How it felt to be part of the "Class of '89 which included in addition to Travis, Alan Jackson, Garth Brooks and Clint Black. Wow, how cool that must have been. If he'd only known how far that class would go, the accomplishments they'd make and the history they'd leave for future generations of country music fans. This really hit home for me and I admit, I got misty.

His first record deal with Warner Brothers and how his deal wasn't the standard "3 album" deal, his was a "3 single" deal. If he released 3 singles and none of them made it to the Top 10, he was out. He blew that concept out of the water with his very first single, "Country Club" in August 1989. The single spent 26 weeks on the Hot Country Singles & Tracks charts, peaking at number nine. His next 2 singles, "Help Me Hold On" and "I'm Gonna Be Somebody," hit number one and two respectively. I guess Travis found a home.

- He told of his fond memories of filming the emotional video for "Anymore" in which he portrayed a disabled American veteran. Everyone else in that video was an actual disabled veteran. By the end of that shoot, he knew every one of those on set by name and formed a friendship. This affected Travis so deeply that he reached out to his state representatives, Congress and senators and asked to let him know how he could help the veteran's cause. He became an official spokesman and representative for those serving the country and he has received many honors since, including a Public Service award from the Department of Veterans Affairs in April 2003. To this day, Travis continues to be a voice for those heroes.

He told of his appreciation for Jerry Reed, Waylon Jennings and Marty Stuart. He talked about memories of them and how their music has impacted his own. 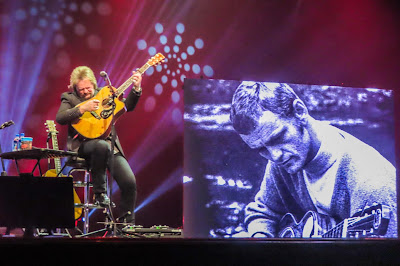 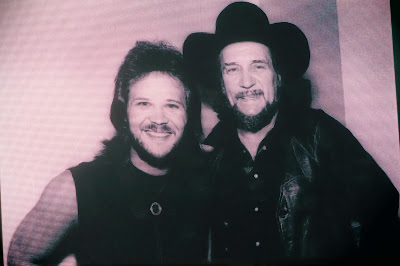 This was quite literally a living documentary, a friendship between a man and his guitar and there were moments during these stories and songs that you could hear audience members sniffling and see them holding back tears. It really was a special performance, the likes of one I'm sure I'll probably never be able to witness again.

The show of hits was ending and Travis said his thank you and left the stage, only to come back a few minutes later to roars of applause to wrap up the night with fellowship and some good old Southern hand clapping and foot stomping with a round of "May the Circle Be Unbroken." I hope this "Circle" does not go unbroken. I hope that today's artists get a chance to go to a Travis Tritt show or the show of another legendary country artist and re-learn what this genre is about and what really good music is. I hope they strive to leave a lasting legacy like Travis, Garth, Alan, Clint and many others are doing. I hope they really learn to appreciate the opportunities they have and make the most of them based on THEIR creativity, talent and ideas and not just what they're instructed to do. I hope they break the mold and be their own artist, truly appreciate the power of a song and know what it means to be a member of the "Country Club." 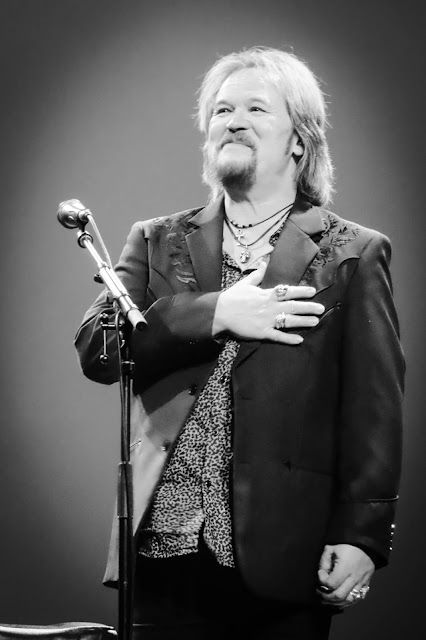 Thank you Travis. You left an impression on me the first time I ever heard your voice and your songs and that impression is even deeper after Saturday night's show. Thank you. That's all I can really say.

I'm Gonna Be Somebody

Drift Off to Dream / Help Me Hold On

It's a Great Day to Be Alive (Darrell Scott cover)

Here's a Quarter (Call Someone Who Cares)

Encore: Will the Circle Be Unbroken?

Photo Credit: Jennifer Smith/LovinLyrics
Photos may not be copied or distributed without written approval from owner.
Copyright restrictions apply
Posted by LovinLyrics at 5:18 PM