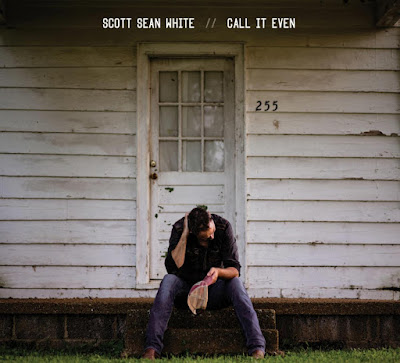 For a songwriter who can produce such magical, poignant, and moving songs, it’s probably no coincidence that Scott Sean White now makes his home in a place called Poetry, Texas. Like Guy Clark and Lori McKenna, White is a writer’s writer. “Some songwriters spend precious time struggling to find their truth and make it rhyme,” says fellow Texas troubadour and songwriting legend, Jack Ingram. “Others just pick up their guitar and tell it. Scott Sean White is one of the others.” Ingram is just one in a long list of songwriters and artists who praise White’s songcraft—Nashville Songwriters Hall of Fame members Tom Douglas, Tony Arata, and Doug Johnson are all outspoken fans as well. “I think God gives us art to penetrate the scar tissue on our hearts to make us feel something again,” says Douglas. “[White] uses artistry and craft for that very purpose.” Needless to say, they are all thrilled to see White send his tunes off for the world to hear.
On April 23rd, White will release his debut full-length album Call It Even; an unadulterated eleven song collection of tunes in which White soulfully invests himself with each new song, delivering them in his life-worn, warm, and vibrant vocals that compel listeners to feel exactly what he’s feeling. Today, Cowboys & Indians premiered the album’s first single, “Dad’s Garage And Mama’s Kitchen,” a vivid and nostalgic portrait of the yin and yang of mom and dad. In the article, Cowboys & Indians writes “If you don’t mind your heartstrings being tugged at and maybe a few tears rolling down your cheeks, you’ll surely appreciate the sentimental and strong new song.” Watch the video for “Dad’s Garage And Mama’s Kitchen” at this link and pre-order or pre-save Call It Even right here.
Call It Even is chock full of every-day-life crafted into song. The jaunty “Crazy ‘Til It Works” illustrates White’s canny ability to tell a tale filled with serendipitous twists and turns to find the just-right word or phrase to describe the unexpected character of life. One day, banging around on his guitar, “not even trying to write a song,” White came up with this line about a couple who gets “married by Elvis in a drive-thru chapel in Vegas.” As he recalls, “It was interesting. I thought to myself, ‘Hmmm, I wonder what that’s about?’ Sounded like a cool, crazy couple who probably didn’t have a chance in hell of making it. So I started running down that road, telling this couple’s story as it unfolded in my head.” White and Jared Hard ended up finishing this bluegrass rambler about just that and the ways that some of the stuff we do in life seems crazy at the time but ends up working.
The lush spaciousness of “Humankind”—with its gospel-inflected piano—movingly tells the stories of two people for whom human kindness provided a balm for their pain. The idea for the song came from White’s co-writer Helene Cronin who saw a hashtag—#Humankind—on the internet. On the day they wrote the song, he says, “she had an idea about how to set it up with something like ‘nothing helps human pain, like human... kind.’ We ended up adjusting that wording by the time we got done but that was the thought that sparked it all. It is one of my most favorite songs my name has ever been on. And possibly...the most impactful.”
Even though Scott Sean White tells his own stories of heartbreak and hope in his emotionally riveting songs, he’s telling everyone else’s stories, too, and in every one of his songs, there’s a glimpse at the ways that everybody’s lives have sometimes fallen apart and been stitched together again by the silver threads of love.
Call It Even Track List:
Call It Even
Crazy But True
Crazy ‘Til It Works
Humankind
Dad’s Garage And Mama’s Kitchen
The Broken Part
Famous
Leaves, Branches, and Trunks
Right Reasons (For Kaiya)
God’s Not Me
When I Go

Posted by LovinLyrics at 3:48 PM