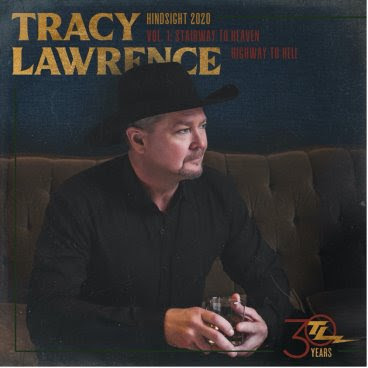 Country music legend, Tracy Lawrence, has a lot to celebrate in 2021! This year marks Lawrence's 30th anniversary making the timeless Country music that has been captivating audiences for the past three decades. In celebration of this momentous career milestone, Lawrence is releasing a special project, Hindsight 2020, a three-volume album that will be released throughout the year, celebrating 30 songs for 30 years of Tracy Lawrence. The career encompassing project is a combination of brand-new material, collaborations, along with some of Lawrence's favorite hits.

"It has truly been the honor of a lifetime to be so welcomed by Country music fans," says Lawrence. "As I look back over the past 30 years, I am incredibly humbled to have been able to live my dream and to have so many folks support me along the way. I wanted to celebrate this amazing milestone with fond reflection and embrace the next chapter with the people who made it all happen, my fans."

Volume 1: Stairway to Heaven Highway to Hell is Lawrence's first release from Hindsight 2020 and will be available wherever you find great music on April 23rd. This 10-song collection features all new material from Lawrence, who penned 9 of the 10 tracks, mixing his signature blend of contemporary and traditional Country music that has made him a mainstay since his debut album, Sticks & Stones, in 1991.

Ahead of the full Volume's release, Lawrence will be releasing new music every two weeks via his social media platforms with title track from Volume 1, "Stairway to Heaven Highway to Hell," available now on all music platforms.
"I had the idea for this song when we were out in Ventura, California. I was thinking of song titles and this one just kind of came to me," says Lawrence. "I really had been wanting to write with Craig Wiseman for a long time and reached out to him. We actually got together and did a Zoom write. I have cut some of his stuff over the years and we had always talked about writing, but this was the first opportunity that we had really taken to sit down and write. I think this thing turned out great and the idea is phenomenal. It's going to be a fun song to play on the road."
Posted by LovinLyrics at 4:32 PM