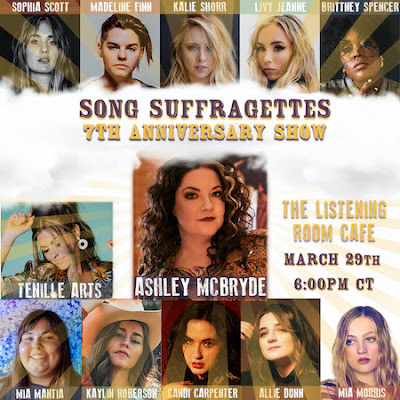 On Monday March 29, Nashville’s all-female, singer-songwriter collective, Song Suffragettes, will celebrate their milestone seventh anniversary with two performance rounds featuring 11 singer-songwriters and a special presentation to respected hit songwriter and acclaimed Warner Music Nashville recording artist Ashley McBryde. In addition to her widely heralded and GRAMMY-nominated albums Girl Going Nowhere and Never Will, McBryde’s long list of accolades include CMA New Artist of the Year ACM New Female Artist and CMT Breakout Artist of the Year awards along with her recent Top 10 RIAA Gold-Certified single “One Night Standards.” Published by Jody Williams Music, McBryde is also an established songwriter who has penned songs for Garth Brooks, Trisha Yearwood and Chrissy Metz. McBryde will be presented with the Song Suffragettes’ “Yellow Rose of Inspiration Award” for her contributions to the songwriting community, including writing many of the songs that have inspired the 308 women who have performed on the Song Suffragettes stage through the years. McBryde is only the third woman to receive that honor after esteemed songwriter/publisher Liz Rose who received it in 2019 and hitmaker Laura Veltz who received it in 2020. McBryde will also take the stage to perform a few select songs as part of the celebration.
Starting at 6pm on March 29 at The Listening Room Café, the first songwriter round will feature special guest and 19th & Grand Records artist Tenille Arts who currently has a Top 10 country radio single with “Somebody Like That.” Arts’ performance will be a special homecoming for Song Suffragettes since Arts played her first of many Song Suffragettes shows back in May of 2016. Of note, “Somebody Like That” was co-written by Arts and fellow Song Suffragettes Allison Veltz and Alex Kline (Kline also produced the track). Joining Arts and hosting the first round of the night will be critically acclaimed TMWRK Records artist Kalie Shorr along with fellow singer-songwriters Madeline Finn, Livy Jeanne and Brittney Spencer (Spencer’s first-ever Song Suffragettes performance).
The second songwriter round of the evening will by hosted by long-time Song Suffragette Candi Carpenter and feature singer-songwriters Mia Mantia, Kaylin Roberson and Sophia Scott along with first-time Song Suffragette Allie Dunn. Both of the evening’s songwriter rounds will be supported by cajon player, multi-instrumentalist and singer-songwriter Mia Morris who will also perform.
Tickets to the March 29 show are available at The Listening Room Café’s website. Like all Song Suffragettes shows, the 7th Anniversary Celebration show will also stream live on the Song Suffragettes YouTube channel: https://www.youtube.com/songsuffragettes/live.
For more information, visit www.SongSuffragettes.com and follow @SongSuffragettes on Instagram, Twitter and Facebook.
Posted by LovinLyrics at 5:56 PM