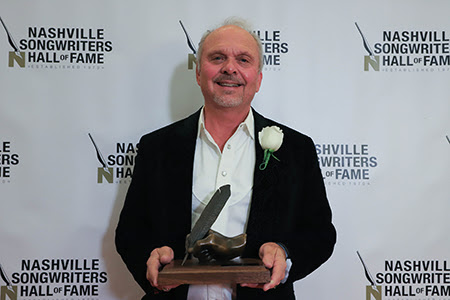 Photo Credit: Moments By Moser
Mega hit songwriter and performer, Kent Blazy, was inducted into the class of 2020 Nashville Songwriter Hall of Fame during the Golden Anniversary plus one during the special 50th And 51st Gala. The Kentucky native songwriter credits include “If Tomorrow Never Comes” (Garth Brooks), “Ain’t Goin’ Down (’Til The Sun Comes Up)” (Garth Brooks) and “Gettin’ You Home (The Black Dress Song)” (Chris Young). Nashville Songwriters Hall of Fame member Garth Brooks took the stage to present inductee Kent Blazy and also perform their hit “If Tomorrow Never Comes.” Blazy and Brooks met in 1987 and began writing together. This song was not only their first collaboration, but also became Brooks’ first #1 single. In 1989 it was named NSAI’s Song of the Year.

“November 1, 2021 will always be a life-changing day for me. Getting inducted to the NSHOF seems like a distant dream for a new songwriter in Music City. You see all the names of the legends and heroes who have been inducted, and you use them as an inspiration to write, write, write,” exclaimed Kent Blazy! “Then one day you get the call that says you will be one of the new inductees. It's the highest honor a Nashville songwriter can have, and I am grateful for all the writers who helped me get there. At the same time, I keep pinching myself that the distant dream is truly a reality. This night will be a dream come true.

The Nashville Songwriters Hall of Fame welcomed ten new members into its ranks as the Classes of 2020 and 2021 were officially honored during NaSHOF’s supersized 50th and 51st Anniversary Hall of Fame Gala. The musical contributions of the newest inductees were celebrated through star-studded performances of some of their biggest songs for the capacity crowd at Nashville’s Music City Center.

For the latest happening with Kent, tune into www.kentblazy.com

Kent's music can be found on all digital music platforms for streaming and download.
Posted by LovinLyrics at 11:51 AM