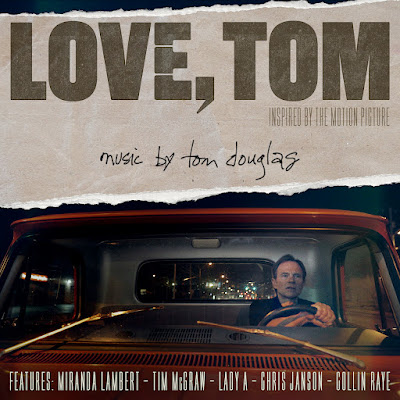 Legendary songwriter Tom Douglas is set to release Motion Picture 'LOVE, TOM' via Paramount+, along with companion album "Inspired by the Motion Picture 'Love, Tom'" via Monument Records on February 24. The 10-song project features many of Tom’s beloved co-writers and friends, including Miranda Lambert, Tim McGraw, Lady A, Chris Janson, and Collin Raye. Each track on the album is performed by Douglas in the film as he takes you back to the day he wrote it. The first release off Inspired by the Motion Picture Love, Tom, “Van Gogh,” arrives today. The song was written by Douglas with Allen Shamblin and produced by Andy Skib. The full album is out February 24, alongside the film

Over the course of a single night in Nashville, GRAMMY, Academy Award, and Golden Globe nominated songwriter Tom Douglas narrates a letter of hope to a desperate world in the upcoming film 'LOVE, TOM'.

A few years ago, Tom Douglas received a letter from a struggling songwriter, asking him what he did when he wanted to give up. When Douglas sat down to write him back, 'LOVE, TOM' was born. Unflinchingly honest and personal, Douglas peels back the curtain of the creative process, revealing his own past hardships and the struggle of the creative endeavor, while singing his own versions of the beloved songs he wrote, at some of Nashville’s most historic and notable locations. Through music and film, 'LOVE, TOM' ultimately reminds us that you can never give up on something that you love.

Directed by Oscar nominated and BAFTA-winning filmmaker Michael Lennox, the film was written by Tommy Douglas and Tom Douglas and will be released via Paramount+ on February 24.