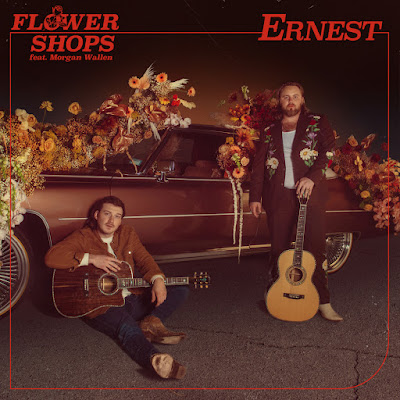 It’s a sunny day for ERNEST with his brand-new song “Flower Shops (feat. Morgan Wallen)” launching this week as the most added single at Country radio with 88 stations spinning the record now. The Big Loud Records MULTI-PLATINUM artist/songwriter surprise dropped the fan-favorite track on New Year’s Eve, quickly catapulting to #1 at Apple Music Country, Spotify Country, and iTunes overall upon release and now debuting Top 30 on the Billboard Country Airplay chart. The melancholic ode was written by ERNEST with Ben Burgess and Mark Holman and produced by Joey Moi. "I'm so grateful for the fans and Country radio for getting behind this song so early on," says ERNEST. "It isn't every day that a record gets this kind of response and I couldn't be happier that 'Flower Shops' is getting so much love."
ERNEST is currently on the road for Chris Lane’s FILL THEM BOOTS TOUR, which kicked off January 13 in Boston, MA. Bringing “Flowers Shops” to the stage each night, the tour will stop this weekend at The Summit in Denver, CO (1/27), The Complex in Salt Lake City, UT (1/28), and Revolution Concert House in Boise, ID (1/29). Adding to his touring resume, the Nashville native will headline hometown hot spot Exit/In for two SOLD OUT nights, March 21 and March 22. Check out all upcoming tour dates HERE.

The hit-maker recently wrapped Season Three of his Just Being ERNEST podcast where he hosted up-close chats alongside trailblazers such as Bobby Bones, John Crist, Craig Wiseman, Morgan Wallen, Chris Lane and more. Past seasons have featured artists and creators from Diplo to HARDY to John Daly and Taylor Lewan. ICYMI, watch on YouTube HERE.

With an ever-growing portfolio of hits, ERNEST is one of the most in-demand songwriters and his profile only continues to rise. Spotlighted as “The Charmer” in MusicRow’s 2021 October/November print issue, he has penned FOUR #1 singles for artists Sam Hunt, Chris Lane, Morgan Wallen, and Florida Georgia Line. ERNEST’s credit is also on Kane Brown’s chart-rising “One Mississippi.” Check out Apple Music’s ERNEST: Songbook for his growing list of cuts.