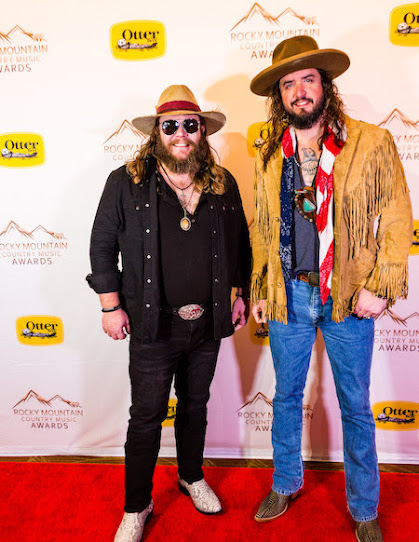 Photo Credit: Randy Owens
Photo ID (L to R): War Hippies, Donnie Reis and Scooter Brown
The Rocky Mountain Country Music Awards hosted their seventh annual ceremony at the Union Colony Civic Center in Greeley over the weekend. Scooter Brown took home the coveted Hadley Barrett Person of Year Award which is presented to a person from the Rocky Mountain country music scene that has done incredible things for their community. Scooter is a combat veteran who works with several organizations that help other veterans and families and was ultimately chosen for this award for the work he does for vets and beyond.

“It’s always great being recognized for the music but I’ve always believed and hoped for that the music would become a platform to shine a light on causes I am passionate about. Having been involved with RMCMA for the past four years, I know how much the Hadley Barrett Person of the Year award means to the organization. I am humbled and honored to have received it this year and hope I’ve inspired others to try and do more good in the world to help our fellow human beings,” said Scooter Brown.


The Hadley Barrett Person of the Year Award is named in honor of the late rodeo announcer who was very involved in the community throughout his career and given to a person from the Rocky Mountain region each year who exemplifies a commitment to serving their community.

“Scooter could, and probably should win this award every year. He makes a difference in so many lives every day. No one more deserving, period,” said the founder of the RMCMA and iHeart radio host, Shawn Patrick.

Scooter has previously won the 2020 Fan Army Award and 2019 Male Vocalist of the Year Award at the RMCMA.

Scooter was joined by world-renowned violinist, Donnie Reis, to play two songs, "Killing It" and "Wicked Game." The two recently joined forces to create the duo, War Hippies. Donnie served in the U.S. Army from 2001 to 2009 and did one combat tour in Iraq during Operation Iraqi Freedom. Stay tuned for a further announcement and new music from the duo out this year.
Posted by LovinLyrics at 9:17 AM