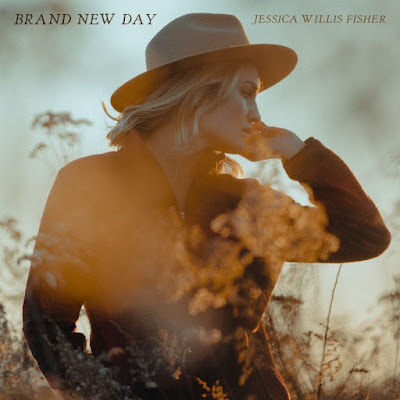 Guided by joy, courage, and gratitude, Americana singer/songwriter Jessica Willis Fisher is reclaiming her voice with the release of her debut solo album, Brand New Day, which is out everywhere today HERE. Produced by Ben Fowler, Brand New Day features 10 original songs, 8 of which Jessica wrote entirely on her own.

Tapping into the most vulnerable moments of her life, Jessica begins an authentic new journey after a dramatic and sudden departure from her family’s band. Until recently, Jessica has stayed out of the public eye since leaving her family’s touring group, The Willis Clan (TLC’s “The Willis Family,” “America’s Got Talent”) after her father was arrested and jailed for sexual abuse.

Brand New Day centers her story with expressive vocals and acoustic arrangements. The album ranges from the romance of “Hopelessly, Madly” to the contemplation of “The Lucky One,” and optimism in the album’s title track. She also revives “Slow Me Down,” a ballad about being present in the moment, which she previously recorded with her family. Her personal struggle to find freedom is evident on the album’s first single, “Fire Song,” a co-write with GRAMMY award-winner Jon Randall (The Marfa Tapes, “Whiskey Lullabye”), but she finds that freedom in the foot-stomping "Gone." An emotional centerpiece of the project, “My History” finds her discovering that there is indeed a way forward through music.

“I’ve truly lived every word on this album. That’s why these songs are both so much more vulnerable and empowering for me,” says Jessica. “If someone truly resonates with them, we both get to feel seen. Together, we know we are not alone as we begin again, each and every day.”

Jessica has a jam-packed week in celebration of Brand New Day – she will be hosting an album release party tonight, April 13th, at 7pm where she will perform all 10 tracks live at Analog, the live music venue at The Hutton Hotel in Nashville. Jessica will be taking over Americana Music Association’s official Instagram page tomorrow, April 14th, she will return to the circle on the Grand Ole Opry stage this Friday, April 15th, and perform at Wines in the Fork Festival in Leiper’s Fork, TN on Saturday, April 16th.

As previously announced this morning HERE, Jessica will make her debut at this year’s AMERICANAFEST, with an official showcase where she will perform a set that will include songs from the new album. Official showcases are curated by the AMERICANAFEST showcase selection committee. AMERICANAFEST brings together legendary artists, the next generation of rising stars, fans, and industry professionals for multiple days of music and education. The must-attend event for anyone who loves Americana's influences including roots, folk, country, blues and soul-based music will be held in Nashville on Wednesday, September 14 through Saturday, September 17, 2022.

“Fisher is an adept fiddle player with an angelic voice and iron will…”
- CMT.com
"The forthcoming album showcases her Dolly Parton-style quiver in bluegrass, folk, country and blues/rock shadings. Her voice and writing recognize a dark history while convincingly embracing a brighter horizon.”
- Billboard
“Every song on the album shows a different way of looking at renewal and shares a different chapter of Fisher’s story, so far...”
- American Songwriter
“Anyone who can’t get enough of Alison Krauss will find a wealth of good music & vocals from this young fiddle player. Ms. Fisher explores country, bluegrass & despite her own dark history, she adds her own sweet personality to allow everything to be an antidote for anyone feeling blue or challenged….considering the hard life Fisher experienced it’s amazing her voice is so filled with brightness & beauty. She provides uplifting & mature songs filled with joy, courage & optimism.”
- Americana Highways
“….a glimpse at the powerful woman that has come out of the ashes in recent years, after her famous family, the Willis Clan, found themselves tangled up in a tragic set of circumstances that could have left Fisher just a shell of what she once was. But instead, she finds herself stronger than ever before.”
- Taste of Country
“Americana singer/songwriter Jessica Willis Fisher reclaims her voice and shares her brave story of survival with her debut album, Brand New Day.”
- Country Now
“Y’all know I love Alison Krauss, and I’m very excited to introduce you to a rising artist who is essentially Alison 2.0...definitely check out
Jessica Willis Fisher...”
- Dierks Bentley, on Nashville Country Countdown
Brand New Day Track List: