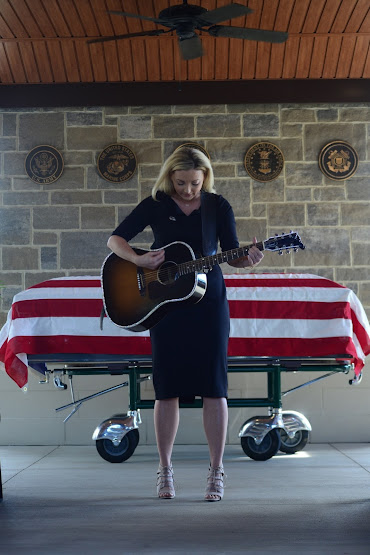 Country singer/songwriter Karen Waldrup honored the life of friend and American Hero Jim “Pee Wee Martin” at his graveside service and Celebration of Life in Xenia, OH this week with a performance of their song "Normandy." Martin, who was one of the last living “Toccoa Originals” of 1942 (made famous by the HBO mini-series “Band Of Brothers, passed away on September 11.
Waldrup had the opportunity to meet Martin at his 100th Birthday Jumpfest and immediately connected with him. After the fest, she had the privilege to spend a day with him listening to him telling stories about his life and sacrifice. That day, Waldrup co-penned the song “Normandy," with Martin and Hunter Jergens.
"Jim Martin changed my perspective on life on March 18, 2021 when I got to sit with him at his home in Ohio and listen to war stories about WW2 and his life," explains Waldrup. "My time with him was short, but I cherished each moment of knowing him. He showed me to view life from a wider lens," Waldrup continues. "He is a true American Hero (even though he says he isn’t) and was a sweet friend to me. I admire Jim’s patriotism, faithfulness and dedication to family, community and our country. It was an honor of a lifetime to perform at his services. This is a memory that will stay with me forever."
The heartfelt tribute was released in June to honor of the 78th anniversary of D-Day. It was also re-mastered and included as bonus track on Waldrup's new album Kendall County Road. Listen here.
Martin's memorial services included both a graveside service and Celebration of Life that featured a traditional 21 Gun Salute, paratroopers and a 30 mile procession from Sugarcreek Township to his final resting place at Dayton National Cemetery where crowds lined the streets to honor the him.

Martin’s family is raising funds to build a statue in his honor in his hometown. More information here. There will also be a press button at the statue where "Normandy" will play.
Posted by LovinLyrics at 4:12 PM