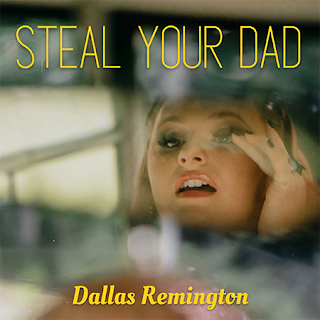 “Steal Your Dad,” sure to become a new party favorite with its fun, catchy lyrics, is available for download and streaming on all digital music platforms, including Spotify, Apple Music, Amazon Music, Pandora, YouTube Music and more at https://orcd.co/dy81me5.

Payback? Humor? Dads? Well, that’s all included in Dallas Remington’s new quirky, country (remember that emphasis on country, y’all) single, “Steal Your Dad.” What started out as a midnight therapy song Dallas was writing alone after some guy ghosted her, became an amazing collaboration with two of Dallas’ favorite songwriters, Nancy Deckant and Cyndi Limbaugh Torres. “Steal Your Dad” tells the story of “some heifer,” as Dallas would say, stealing her man and her plan to get even. Y’all get ready to laugh hysterically, plan some payback and see why this song has been blowing up on social media!

“‘Steal Your Dad’ is one of those midnight, ‘let it all out’ songs that I started by myself,” explained Dallas Remington. “Normally those songs don’t go anywhere, but I thought I was onto something.” She went on, “The next day, I took it to two of my favorite co-writers, Nancy Deckant and Cyndi Limbaugh Torres, and the rest is history. The love and reaction this song is already receiving has been blowing my mind and I can’t wait to see where this little ditty goes! Let’s go steal some dads y’all!”

“Dallas came into the writing session with something she had been working on. When I heard the line, ‘you stole my man, so I’m-a steal your dad” I was hooked,” shared Cyndi Limbaugh Torres. “It’s unique and funny and I was so excited to be invited to write it with her. Dallas, Nancy and I have been writing together for years. We love hanging out and we always get around to songwriting. Over the years we have laughed together, cried together, eaten together and sometimes we get to write magic together. This was one of those times.”

“Where can you go when you’ve been dumped? You can go to the bar, drink too much and end up crying late at night all by yourself, or you can come to the co-writing room to have some fun with it!” expressed Nancy Deckant. “Country music has a long history of not taking itself too seriously and I’m so glad Dallas is willing to go there. When Dallas walked into the room and started singing, right away I knew she was onto something. ‘Steal Your Dad’ is one of the best ‘get even’ songs ever!”

“Well you waltzed on up in your little mini skirt
Used your cowboy hat and daddy’s money to flirt
My man didn’t know what hit him next thing he was gone
But that’s just how love goes so it’s time to move on
I guess I’ll find me a new one too
Yeah I’ll tell what I’m gonna do
You stole my man so ima steal your dad
I know you think you don’t think you done anything bad
But I’ll show you real quick how i can prove you wrong
You’re gonna think it’s real funny when you gotta call me Mom
I’ll spend what's left of his life holdin’ his hand
You stole my man so ima steal your dad...”
Keep current with Dallas Remington by following her on her website at dallasremington.com and social media platforms

Posted by LovinLyrics at 5:12 PM