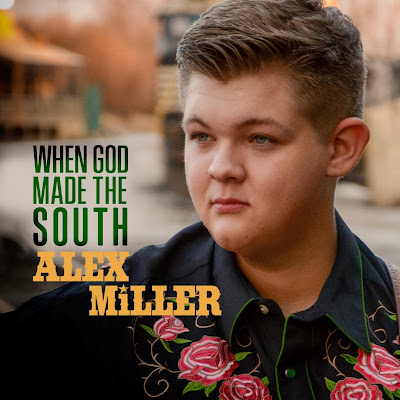 American Idol alum Alex Miller’s fans have been eagerly awaiting new music, and tomorrow he delivers with “When God Made The South.” An anthemic, guitar-driven ode to the glories of Southern living, the track is a great send off to summer. “WGMTS” is as gritty as a gravel road, as raw as moonshine and as slick as goose … well, you know. It’s a bit outside of what most might consider Miller’s “traditional Country” lane, but the move was intentional and offers a glimpse at another side of this talented Kentucky-born vocalist. The track is available for pre-save now.

“I really took the Idol judges’ advice to heart,” Alex admits. “I get that I have to challenge myself and keep growing to keep going in this business. This song was perfect for me. It screams ‘hit’ and the minute I heard it I knew we had to cut it. The lyrics are straight on Country. If you just read them, you’d never know this single was so edgy, but Jerry’s production takes things in a whole different direction - and I think it is just awesome.”
There's no doubt He had a real good day
There were Blackberry's blooming in the red dirt clay
And the smell of Jasmine floating through the Pines
I bet He knew right then we'd love our chicken fried
And sweet tea to wash it down
When God Made The South
(Jerry Salley/C. Aaron Wilburn/Lee Black)
Early reviewers are sold on the track:
“I really struggle to think of a young artist as self-assured of his style and brand as Alex Miller. This single gives a nod to modern Country radio without sacrificing identity.”
- Billy Dukes, Taste of Country
“A trailer load of grits ain't got nothin' on Alex’s latest."
- Duncan Warwick, Country Music People
"Alex shows off his jammin' side with utmost perfection!"
- Preshias Harris, Nashville Music Line
“Best of all possible worlds – the past, present and future of Country - all wrapped up
in one song.” - Char Richards, The Life Box Media Channel
Produced by award-winning songwriter and industry veteran Jerry Salley for Billy Jam Records, “When God Made The South” is the first release from Miller’s second and upcoming album for the label. His debut CD, MILLER TIME, delivered three well-received singles: “I’m Over You, So Get Over Me,” “Don’t Let The Barn Door Hit Ya” and “Through With You” (which took Alex to the Top 35 of the Billboard Indicator Chart, and reached #2 on THE COUNTRY NETWORK with its companion music video).
We’ve been on a real journey together for the last 18 months,” says Salley of his relationship with Alex. “We’ve learned so much about each other on a musical - and personal level. What stands out the most to me is that he loves all kinds of music. As Country as Alex is, he can perform any type of music that moves him. He is not one dimensional. It is a blast to hear this kid stretch a bit outside of his natural zone and try something new. He is so young and can go so far, it should be fun for him.”
Miller’s had a blast to date; he loves the road and the energy of the crowds and this year he has shared the stage with Brooks & Dunn (Iowa State Fair), Jamey Johnson (Wisconsin State Fair), Generation Radio (Ohio State Fair), Niko Moon (Kentucky State Fair) and King Calaway (Oklahoma State Fair). Additionally, he’s headlined at the New York State Fair, opened shows for Diamond Rio and Sawyer Brown, and debuted at the popular Wild Rose Casinos in Iowa.
﻿
Upcoming performances and appearances include: