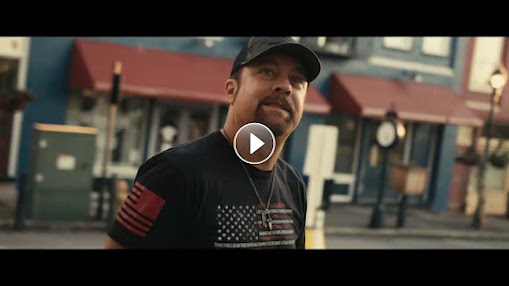 Country singer and songwriter Colton James has released his music video for his single “I Miss America.” The video represents the heart of America and the things that comprise it: veterans, family values, and hard work.
Produced by Colton and Jimmy Nichols, written by Colton and Rick Dawson, and mixed by Steve Marcantonio, “I Miss America” recalls simpler times gathering around Grandma’s table for Sunday lunch with friends and family and working sunup to sundown.

Colton speaks on the release of the music video, saying, “We had a lot of fun shooting the video and made some new friends along the way. We hope that it brings people together in our country and puts a smile on their faces to be proud Americans. We hope they realize our best days are ahead, and together, we can get through anything as one nation.”

Rick Dawson, the owner of 2022 Kentucky Derby-winning thoroughbred Rich Strike, commented on the writing process of “I Miss America,” saying, “Colton and I gathered at my table and wrote the song in a couple of hours. However, Colton and I were not alone, as there were others in spirit pushing our pens for us.”

On January 20, 2023, Colton plans to release his debut EP, America, which will include “I Miss America” and other nationalist anthems that speak for the love of his country and those who have fought for it.

Colton also has plenty of upcoming projects in the works, including a show combining fishing, music, and food from across the globe titled Reel Water Cowboy. It will also have an accompanying radio show. Along with this, he is working to bring the Land 4 Heroes Lodge, a 15,000-square-foot building that will aid and help veterans while giving them a resting place to break bread and visit with others.

Colton James’ country roots run deep and were developed at a young age. What started as a truck ride to the fishing hole became a lifestyle. In the front seat of his father’s truck, Colton was introduced to legends like George Jones, Keith Whitley, George Strait, and Merle Haggard. He discovered his love for music through both of his grandmothers, who played piano and organ, and his singing abilities came from his mother.
His music showcases his down-to-earth mentality, country roots, and passion for country music and America. Colton has opened for established artists like Carrie Underwood, Florida Georgia Line, Toby Keith, John Pardi, and Jason Aldean in his career. His influences include the great country artists from the 90s who inspire his storytelling skills that listeners can appreciate in his music.
Colton expresses why he loves making music, saying, “I do it for the love of my family, for the love of my friends, for the love of my country, but mostly for the love of God. Without God, I wouldn’t be here.“
Posted by LovinLyrics at 2:39 PM