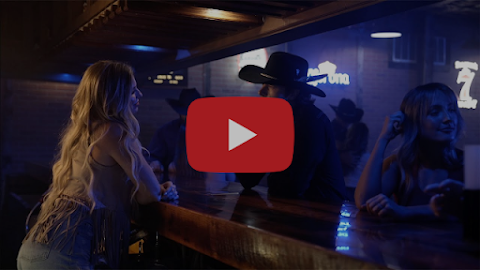 Warner Music Nashville artist and Amarillo, Texas native Randall King has a knack for creating tunes that you can tap your feet to, and as fan-favorite “You In A Honky Tonk” off 2022’s Shot Glass gets a video treatment, it also brings a new two-step to one of middle Tennessee’s last remaining true honky tonks.

“In West Texas, if you don’t keep ‘em on the dance floor you aren’t doing your job,” King speaks of his early days playing for tips and growing his touring base. “When I booked my first headlining gig in Tennessee, I couldn’t believe we pre-sold-out Cahoots Dancehall & Honkytonk. It’s kinda become a tradition to bring these songs to life there just like I remember that first night on their stage. First with our ‘Record High’ music video, and now, with a song named ‘You In A Honky Tonk,’ you have to go to a real honkytonk for the video.”

Claiming a MusicRow DisCovery Award upon its release, critic Robert Oermann states, “this dude is a for-real country singer, and this rhythm-happy Texas honky tonker stakes a for-real claim to stardom,” while Rolling Stone remarks, “King sings it with delicious gusto, curling his voice around notes in impressive — but not flashy ways — and demonstrating why he’s a talented newcomer to watch.” And King’s music has even Saving Country Music opining, “nobody is more traditional when it comes to new mainstream country than Randall King,” and the UK’s Holler noting ahead of his performance at C2C Festival this year, “there’s an old-fashioned sensitivity and a likeable softness to King’s particular brand of cowboy masculinity.”

Written by John King, Matt Rogers and Brandon Day, the Bart Butler and Ryan Gore-produced “You In A Honky Tonk” music video was brought to life by director Brooke Greenberg after already amassing millions of listens (and spawning tens of thousands of videos) thanks in large part to user LonestarTequilaBar’s original thigh-grabbin’ new line dance. “Naturally when it came time to shoot the music video, we had to have the ‘You In A Honky Tonk Two Step’ featured,” King boasts, “and who better to star in this than the ones who made it famous!” See King with the duo behind the scenes of the shoot HERE.

With a hefty tour schedule spanning from Montana to the Carolinas and every state in between, visit randallking.com to find a show close to you and see King under the neon for yourself.
Posted by LovinLyrics at 11:35 AM