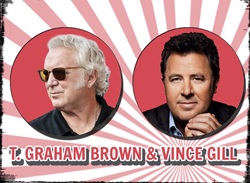 "I first met Vince in 1991 in a limo in Hollywood going to the Academy of Country Music Awards", recalls T.Graham Brown. "I was walking from the Sheraton Universal Hotel to the Universal Ampthitheater where the awards were being broadcast. It was a short walk, but there was a rising star, Clint Black, riding by in a white limousine. He rolled down the window and yelled for me to get in, although the building was only a few hundred feet away. I climbed in and there sat Vince. God had thrown us together for the first time. That's how we first met. I had never asked Vince for a favor in all these years until God, again, threw us together in a long white limo in the form of a gospel song. I'm making, what's turning out to be a wonderful first gospel album and needed "a Vince Gill" and I figured it was time to call the original. It only took one call for him to say yes when I asked him to play guitar and sing a duet with me. Well, today, for the first time, I heard our voices together, it was a joyful noise. I shed a tear. Ain't life funny? Thanks Vince and thank You, Father. It's all for your greater glory and it's been my distinct honor."
- T. Graham Brown

"T." Graham Brown has recorded a total of thirteen studio albums, and has charted more than twenty singles on the Billboard Hot Country Songs charts. Several of his songs have become country music classics. Songs like "Hell and High Water" and "Don't Go to Strangers" and "Darlene" and a string of other chart-topping, award-winning hits, have positioned “T” among the greatest country artists of all time!

“He’ll Take Care of You”, is an uplifting, positive affirmation of God’s promise to see man through troubled times. Written by award-winning hit writers; Dan Penn, Gary Nicholson and Donnie Fritts, the song features vocal performances by two of the most popular and distinctive voices in the industry, T Graham Brown and Vince Gill. Vince also offers up a guitar solo that is simply put, "classic Vince". It is produced by well-known Nashville record producer Mark L. Carman and released on the MCM World Media label. "The excitement around this single is overwhelming. We're already getting reports of airplay and strong rotation on radio stations worldwide prior to it's official release date next week on July 2nd.

Scott Orchard, MCM World Media Director of Marketing said, "This is a very strong single, featuring an all star cast of top Nashville Musicians supporting two Country Legends and produced by Mark Carman. This single and the release of the full album later this summer is sure to have a huge impact on the industry and T. Graham Brown's fans."