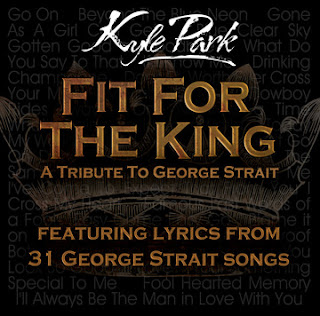 “Writing this song was more about putting everything together, kind of like a puzzle,” shares Kyle Park. “I had a lot of George Strait CD's and tapes at the time, (and I still do). I laid them all out across the floor and started with the song ‘Go On,’ placing the right titles in the right place. The song basically rolled out from there!”

“Fit For The King” is the follow up to his back-to-back, #1 smashes “True Love” and “The Night Is Young.” Featured on his current album BEGGIN’ FOR MORE, the song is already garnering buzz amongst radio.

“Kyle’s tribute to George Strait is something that I feel is needed in country music today … For Kyle to remind us just how great George was, is, and always will be was very comforting to me as a fan of Kyle and of course George,” - Adam Drake, KORA/College Station, TX

“’Fit For the King’ is a musical puzzle that instantly draws you in ... all the pieces fit together, you know all the songs, and in the end you say WOW that was awesome! Kyle Park is at the top of his game!” - Austin Daniels, KFTX-FM/Corpus Christi, TX

The Austin native first hit the music scene in 2005 with the album BIG TIME followed by 2008’s ANYWHERE IN TEXAS. In 2010, he released two EPs. His breakthrough 2011 release, MAKE ME OR BREAK ME, delivered the hit title track, which earned Kyle a #3 spot on the Texas Music Chart and stayed in the Top 10 for over six weeks. Kyle has quickly become known for his top-notch, energizing live shows and growing loyal fan base, securing his name an honored spot on the back wall at Billy Bob’s Texas, right alongside Pat Green, Blake Shelton, Alabama, Brad Paisley and Tim McGraw.

For tour dates and more, visit KylePark.com.
Posted by LovinLyrics at 1:10 PM