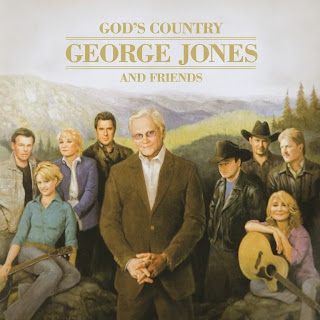 (Nashville, TN...) - Red River Entertainment continues to cement its presence in Nashville with the release of God's Country: George Jones And Friends, which will hit stores tomorrow, July 23, 2013. The 10-cut album is a tribute to one of the greatest voices in the history of American music and features the likes of Garth Brooks, Joe Diffie, Vince Gill, Tracy Lawrence, Pam Tillis, Tanya Tucker, and more putting their own unique styles on classic George Jones hits.

Originally released on a limited basis in 2006, the package also includes a behind-the-scenes DVD of the making of the album. Country Music fans will be enamored with this piece of history that gives viewers a unique and personal connection to one of the all-time country music greats.

"I want to thank everyone involved in this project," Jones stated, when the cd was originally recorded. "I particularly want to thank all of the artists who participated in this wonderful tribute to my music." Jones, who had more than 150 hits during his storied career, passed away in April of this year at the age of 81.

"Nobody in the world sings like George Jones and nobody CAN sing like him," said Vince Gill, who wails on "She Thinks I Still Care."

Tracy Lawrence, who contributed "The One I Loved Back Then (Corvette Song)" to the project, added, "Without George Jones we wouldn't have anything we have today."