CHARLIE DANIELS RELEASES "THE DEVIL WENT DOWN TO GEORGIA" EBOOK 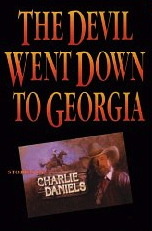 (Mt. Juliet, Tenn. – August 21, 2013) Legendary Country music artist, Charlie Daniels, has made his previously released book, The Devil Went Down To Georgia available for readers on Kindle through Amazon.com and Apple iBooks.

The Devil Went Down To Georgia: Stories by Charlie Daniels is a timeless collection of short stories and vintage photos. Peachtree Publishers originally released the hardback version in 1985.

Charlie Daniels proves he doesn't need music to tell a great story in his first book The Devil Went Down To Georgia. The book features a short biography, expanded stories of some of his most beloved songs, some original yarns featuring some eccentric characters, like the nonstop talking Radio Smith and Mrs. Effie who got dressed up when she got her first television set because she thought the people on the screen could see her, and the heartwarming “A Carolina Christmas Carol,” which Charlie reads to friends and family every Christmas Eve. Charlie's written a lot of great story songs, and with this collection he proves he is a great storyteller.

In 1985, Charlie wrote, "When my publisher told me he would like to have a brief autobiography to go along with my short stories, I was a little hesitant. That story has a beginning, I told him, but I'm still working on the middle and the end. So he said he'd settle for the beginning which is exactly where I'm gonna start". That is how Charlie Daniels’ The Devil Went Down to Georgia book begins.

Charlie's love for his family is evident in his dedication and throughout the stories and childhood memories in this book.

"Dedicated with love to my mother and dad,

The Charlie Daniels Band is currently entertaining fans and performing concert dates across the USA. For tour dates and more info on Charlie Daniels, go to www.charliedaniels.com, Twitter and Facebook.