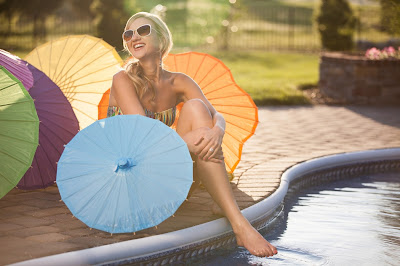 NASHVILLE, Tenn. (Wednesday, August 21, 2013) -- Country music star Sarah Darling has been making heartaches disappear all summer long with her latest feel-good break-up anthem, "Little Umbrellas," and now she'll debut the song on national TV on FOX & Friends this Saturday, August 24 (6 a.m. to 10 a.m. EDT). Darling will also perform on CBS New York's "The Couch," Friday, August 23 (7 a.m. to 9 a.m. EDT) where she'll share what it was like to tour with Alan Jackson, release her first EDM remix, and more, all in support of her two headlining shows in the New York area this weekend.

Making her mark on the country genre with her Top 35 Country Billboard sales single, "Home To Me," in early 2013, Darling released "Little Umbrellas" at the 'unofficial' start of summer over Memorial Day weekend. The song spawned immediate praise from music critics including Robert K. Oermann (Music Row) who called it "perky, bopping and extremely catchy," and catapulted to the Top 12 on Sirius XM's "The Highway Hot 30 Live." It continues to earn radio spins weekly.

"'Little Umbrellas' is my first independent single release, so it was a pretty big risk for my team and I to put it out there. I'm truly taken back and humbled by the incredible momentum it's generated, " she said. "Thanks to all of my fans and industry supporters who have helped make it my 'Soundtrack to Summer 2013!' It's the greatest gratification when I look out in the crowd I see people up out of their seats dancing and singing along to it...that's why I do what I do!"

Darling will have the chance to thank her fans personally during a live streaming concert on StageIt tonight, Wednesday, August 21 at 8 p.m. EDT / 7 p.m. CDT. All available tickets were sold-out in less than 45 minutes after the show was announced via her Facebook and Twitter pages, but thanks to earnest hankering from fans, additional tickets have been added! To purchase, click here. Ticketholders and tippers have the chance to win exclusive prizes like autographed CDs, photos and even a personal call from Darling over Skype.

Additionally, over the next three weeks, fans can beat the August heat with Yallwire's exclusive "Little Umbrellas" prize pack contest. Register to win exclusive Sarah Darling merchandise including a signed umbrella and CD, which includes the EDM remix version of "Little Umbrellas" (ft. DJ DU). Darling will appear on the Yallwire homepage "Hot List" for coming weeks. Spread the word on Twitter and Facebook using #LittleUmbrellas.

Darling will perform this Friday, August 23 at The Newton Theatre in Newton, NJ and again in the tropical, tiki hut setting of the Dublin Deck in Patchogue, NY on Sunday, August 25. The show starts at 6:30 p.m. Tickets are $10 at the door.