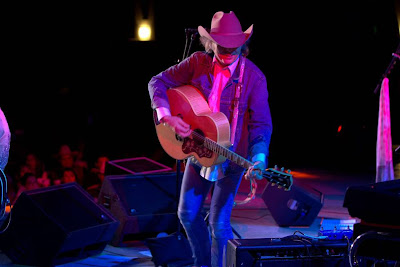 "I'm very much looking forward to playing the 3 Pears tour in my adopted hometown at such a great and historic venue, Hollywood Palladium, whose storied reputation--from the Academy Awards to legendary musical performances--was kept intact and paid tribute to by its complete restoration and reopening for live shows," said Yoakam, who is currently touring in support of country's most critically acclaimed album of 2012, 3 Pears. "On September 6th, we are going to turn it into the rockin'est honky tonk on Sunset Blvd."

Dwigh has been touring heavily since the 2012 release of 3 PEARS (Warner Bros.), including headlining dates and return engagements at both Bonnaroo and Stagecoach. He’s currently touring the U.S. and Canada, with dates booked well into December.

In a live review of his April ’13 two-night sold-out engagement at Nashville’s Ryman Auditorium, Rolling Stone said; “It was a fitting presentation for a singer whose ironclad alloy of rockabilly, Bakersfield worship and British Invasion pop has long made him both a postmodern preservationist and a progressive misfit in country music…The continuing vitality of that singular country-rock conflation was in full effect on the 3 Pears selections, which fit seamlessly within the shows' Yoakam catalog overview. Although the singer took the rare banter break to thank the crowd for their patience enduring new songs, he really didn't have to, as audience members hung on every note of Pears standouts, such as the dreamy, country-psych lullaby ‘Waterfall’ and the title track, a shimmering Brill Building-gone-Bakersfield piece of pop perfection punctuated by glockenspiel, panoramic guitar jangle, plucking mandolins and a timeless groove borrowed from ‘Be My Baby.” (4/15/13)

Dwight was included in more critics’ year-end lists in 2012 than any other country artist. In addition, 3 Pears holds the record for the most weeks at #1 (eight) at Americana radio. Here’s a sample of other praise for 3 Pears, which marks Yoakam’s 26th studio album and is his highest-charting debut on the Billboard 200 and Billboard Country Albums charts.

Here is a sampling of critical praise for 3 Pears:

“For his first album of originals in seven years, trad-country torchbearer Yoakam had the inspired idea to call on Beck to produce a couple of tracks. The result, in ‘A Heart Like Mine,’ hits you like a linebacker--a ringing, clattering blend of Buck Owens-style California country and Sixties garage psychedelia.” - Rolling Stone, (December 2012)

“I'll name my favorite country album of the year: Dwight Yoakam's 3 Pears, which is not just a return to form for the honky-tonk singer, but also one of the most consistently pleasurable albums by anyone this year.” - Ken Tucker, NPR (12/11/12)

“…Yoakam's wide ranging influences are fully integrated into the singular perspective of an artist. In other words, it all comes out sounding like Dwight Yoakam--at his best. Sharp, conceptual, and full of adult longing, this leap forward still honors the ol' Guitars, Cadillacs." - Alan Scherstuhl, Village Voice (12/21/12)