Watch Exclusive Version Of #1 Hit “The One That Got Away” At LateNightWithJimmyFallon.com 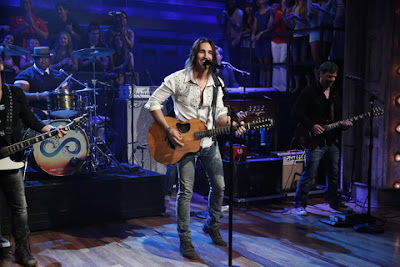 Nashville, TN (August 9, 2013) – Last night (8/8), Jake Owen debuted his brand new single "Days of Gold” on NBC’s Late Night with Jimmy Fallon. Watch via: http://www.latenightwithjimmyfallon.com/video/jake-owen-days-of-gold/n39812/. The show revealed that "Days of Gold" is the lead single from his forthcoming album of the same title to be released on December 3.

Jake also taped a web exclusive of the GOLD-certified, #1 hit “The One That Got Away” for LateNightWithJimmyFallon.com. The song is featured on his RCA Nashville album BAREFOOT BLUE JEAN NIGHT, which debuted at #1 on Billboard’s Top Country Albums chart.

The Vero Beach native has emerged as one of country music’s leading vocalists with four consecutive #1’s, including the multi-week chart-toppers; the DOUBLE PLATINUM "Barefoot Blue Jean Night" and PLATINUM “Alone with You,” in addition to the first #1 he co-wrote with the GOLD-certified “The One That Got Away” and the GOLD-certified “Anywhere with You.”