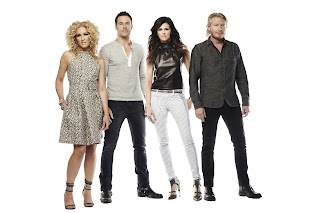 CMA’s reigning Vocal Group of the Year, Little Big Town, had settled into director’s chairs on the fourth floor of the Bridge Building. Although it hadn’t yet been announced on this day in early May, they were confirmed to host the three-hour special, “CMA Music Festival: Country’s Night to Rock,” airing 8-11 PM ET/7-10 PM CT, Aug. 12 over the ABC Television Network. They’re no strangers to performing at Music Fest, but this year would spotlight – and challenge – them as never before.

Yet there were no signs of nervousness as cameras began to roll. Karen Fairchild, Kimberly Schlapman, Phillip Sweet and Jimi Westbrook took to the subject at hand as the world has come to know them — with confidence, a feeling of unity tempered by their strong individual personalities, and with a sense of humor that could tickle any or all of them without warning into a few seconds of laughter.

How did you hear that you were being invited to host this year’s Festival special on ABC?
FAIRCHILD: I really don’t know how we got it, but we sure are glad we did (laughter). When we found out, we were just thrilled. Do you know how many CMA Fests this is for us?

FAIRCHILD: That was at the (Tennessee State) Fairgrounds. We got to play two songs in front of Wynonna.

SCHLAPMAN: We had just gotten a record deal in May, and this was in June. So it was huge for us! It was one of the biggest things we’d ever done — well, obviously, we’d only had two months as a band (laughter). I just remember thinking, “Wow, we just know two songs!”

SWEET: We had only one guitar too — an acoustic. That was it. We prayed we wouldn’t break a string.

FAIRCHILD: That was a big worry. “What if we break a string? Do you think Wynonna would let us borrow a guitar?”

What was it like to play on the LP Field stage for the first time at CMA Music Fest?

SWEET: There is nothing like that crowd. It’s the biggest gathering of Country Music fans in the world. People plan their vacations around that time. It’s all about one thing: the love of Country Music. There’s nothing like standing on that stage and feeling that energy come back at you from that many people. It’s just unbelievable.

FAIRCHILD: Hosting this year, we get to experience that every night, as opposed to just doing the 20-minute set artists normally get. It’s the most fun 20 minutes of the year for this band every year.

SCHLAPMAN: And that photo line that comes up to the front of the stage is so much fun to watch because we remember when we had those very few fans in the very beginning — and they’re usually there, coming through and waving at us.

FAIRCHILD: That’s the connection! We feel like we know their families and they know ours.

WESTBROOK: There are so many times when we see them in those moments. The first time we got to play the big stage, they were looking around, like, “Can you believe this?!” They were sharing that first-time experience with us, like it was their own. They’re the best.

FAIRCHILD: Country Music fans are the most loyal fans ever. When they invest in an artist and latch onto their music, they never let go.

Are you planning any surprises in hosting the show?

FAIRCHILD: We’ve got some moments planned, particularly with friends (smiles).

SWEET: We’ll get to do some things as a group and also individually. We can be in four places at once and just have fun with it.

WESTBROOK: Who knows? We might put someone in a helicopter (laughs).