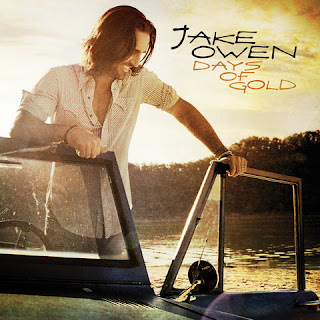 Photo Credit: Courtesy of RCA Nashville
Nashville, TN (August 6, 2013) – This week promises to be a golden one for Jake Owen as he debuts his brand new single “Days of Gold” on Late Night with Jimmy Fallon on Thursday (8/8), airing on NBC at 12:35P ET/ 11:35P CT. The vivacious, dynamic song will impact Country radio next week and is available beginning today (8/6) at all digital retailers.

“The Days of Gold are the good times… The times we remember. The times we reflect on,” shares Jake Owen. “I’ll always look back on my life and remember these days. For me, these times in my life right now really are the days of gold!”

“Days of Gold” is the lead single from his highly anticipated forthcoming full-length studio album produced by Joey Moi, expected for release later this year. For an exclusive behind-the-scenes look at Jake’s photo shoot for the album, watch here: http://www.youtube.com/watch?v=w3IXTvs_AVs

Since releasing his chart-topping album, BAREFOOT BLUE JEAN NIGHT, Jake has emerged as one of country music’s leading vocalists. The RCA Nashville project has delivered four consecutive No. 1 hit singles, including the multi-week chart-toppers; the DOUBLE PLATINUM title track and PLATINUM “Alone with You,” in addition to the first #1 he co-wrote with the GOLD-certified “The One That Got Away” and the GOLD-certified “Anywhere with You.”

His energetic live show and captivating songs have landed him coveted opening slots with Keith Urban, Kenny Chesney, Tim McGraw and his first headlining tour, CMT ON TOUR JAKE OWEN: THE SUMMER NEVER ENDS 2012, which made CMT history for the most sold-out shows in a row for the annual nationwide tour. The American Country Awards Breakthrough Artist of the Year is currently touring with Jason Aldean's NIGHT TRAIN TOUR with upcoming shows in Hershey, PA (8/10), Saratoga Springs, NY (8/11), and Cincinnati, OH (8/15).

The Vero Beach, FL, native first captured the national spotlight with his hits “Startin’ with Me,” “Don’t Think I Can’t Love You” and “Eight Second Ride.” The 2009 ACM Top New Male Vocalist’s revival of “Life in a Northern Town” with Sugarland and Little Big Town in 2008 earned him Grammy and CMA Award nominations.