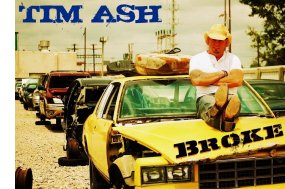 Showcasing Ash’s “pop sensibility” in vocal range and ability, as well as musical composition, the tune “Broke” (released as official on July 29, 2013/ available on PlayMpE), reveals Ash’s “roughneck” good ol’ boy roots with countrified rap-like verses, special effects and an infectious melodic chorus. Written by powerhouse hitmaker collaborators Ashley Gorley (“Crash My Party”/ Luke Bryan, “Good Girl”/ Carrie Underwood) and Bryan Simpson (“Better Than I Used To Be”/ Tim McGraw), the storyline equates the humorous and metaphoric “relationship” between a broken heart, an egg, a window, an empty wallet and a car up on blocks—all in a “no-fix” situation. The rocking guitar licks intensify the bitter sting of a heartache realized.

Prevalent in Ash’s delivery, his influences (Garth Brooks/David Lee Roth/Jon Bon Jovi/New Grass Revival /The Eagles) contour his “less is more” sound and knack to produce impressionable imagery and energy. Setting the bar to align with the elite circle of 2013 newcomers in the format, Ash’s natural talents to incorporate the keys, elevating piano as a country music instrumental standard, set him apart, far and above from the pack.

“The Ash family name is synonymous with music in our hometown; I come from a long line of musicians. I was born into it,” Ash introduced. “I am proud to return to Music City with a new lease on life, renewed insight into the entertainment business and the sole ambition to truly inspire listeners to trust and follow their hearts to live and dream big!”

Courted by Nashville major record labels in early 2000, Ash returns with a maturity that suits and he is defined by his faith, family, music and vitality. (Tim is married to his soul mate and a proud father of five). Much of his insight and spirit for life are the result of a treacherous near death pipefitting accident where Ash found himself pinned beneath a half-ton of steel. He endured and overcame an uncertain “touch-and-go” 30-month recovery. The injuries sustained included loss of memory and faculty coordination forcing Ash to relearn much of what seemed to come naturally in his youth from riding a bicycle, driving a vehicle and playing the instruments he originally learned by ear (guitar, piano, bass and drums).

Perseverance prevailed. Ash forged forward and has since shared stages with award-winning, headlining acts including Keith Urban and Rascal Flatts; he toured with Travis Tritt (Grill For The Thrill Tour) playing nearly 20 dates.

“I believe I’m back in the music circle for a reason. God, my family and my music got me through what was, and could have been, a life changing experience. Because of it, I want to help change people’s lives with my music; my goal is to champion a ‘Don’t Stop Believin’ kind of moxie.”

Ash is scheduled to shoot the corresponding “Broke” music video beginning this Friday (August 9, 2013) in Evansville, IN. The “Ash to ashes” film (produced by Skydive Films-Nashville) will burn the midnight oil from start to finish (concluding Sunday afternoon, August 11) and feature a smokin’ hot junkyard party, a piano in flames and fiery lake performance.

Spin Doctors Promotions-Nashville is spearheading the single radio promotion; “Broke” is available via all major Internet outlets. Ash’s UP ON BLOCKS will be available October 15, 2013.

For more information on Tim Ash, visit: www.timash.net.
Posted by LovinLyrics at 2:55 PM