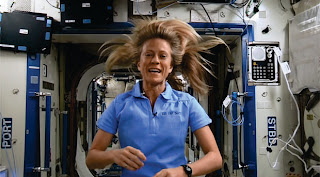 DETROIT LAKES, Minn. (Tuesday, August 06, 2013)-- The 31st annual WE Fest, with the cooperation of NASA, created a once in a lifetime introduction for GRAMMY winner and international country music star, Carrie Underwood, for her Saturday, Aug. 3 performance at WE Fest. Underwood, via video link, was welcomed on stage to 47,000 awed fans by Karen Nyberg, currently serving at the International Space Station (ISS) circling earth in a 255 mile high orbit.

Mrs. Nyberg, a huge Underwood fan and equally huge fan of WE Fest, was raised in nearby Vining, Minn. and is a graduate of University of North Dakota, Grand Forks. She is married to fellow astronaut Don Hunley who was on stage for this out-of-space introduction. ​
Posted by LovinLyrics at 2:44 PM