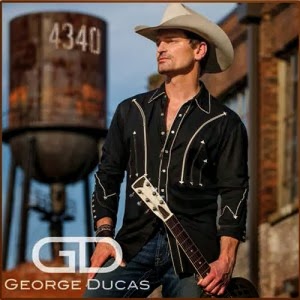 One of country's most prolific songwriters and performers (and a longtime personal favorite), George Ducas, is set to release his long-awaited, full length cd "4340" on October 29, 2013 and it can't come soon enough for fans. If you're not familiar with George, he's been a staple in country music for years, not only with his writing with hits like "Real Fine Place to Start" (Sara Evans), "Won't Be Lonely Long" (Josh Thompson) and cuts by other artists like George Jones and Garth Brooks, but with his own hits like "Lipstick Promises" and "Every Time She Passes By". When it comes to simplistic tradition, George Ducas is exactly that.

George is known for his unique edge and enduring style and he doesn't fail to deliver in this new project. This cd not only features his own writing, but songs co-written by some of the best in the business Keifer Thompson (Thompson Square), Jim Beavers ("Red Solo Cup" - Toby Keith), Radney Foster ("Just Call Me Lonesome" - Radney Foster), Jon Henderson ("Family Man" - Craig Campbell)  and Jason Matthews ("Must Be Doing Something Right" - Billy Currington). There is nothing lacking on this cd, it's teaming with style, grace, tradition, thump and twang. There is something for everyone here. This is a brilliant cd, for lack of a better term.

His lead in single, the upbeat and assertive "CowTown" (co-written with Jim Beavers) recently went out to country radio after being introduced to his local fans in his home state of Texas and is keeping crowds on their toes at the live shows. Having seen George perform this single live, it will definitely get you up and moving. The single has garnered great reviews so far. There is a great track listing on this cd, "Give Me Back My Honky Tonk" which I think speaks for those of us whose musical interests are rooted in traditional country, "I Need to Love You", "White Lines and Road Signs", "This One's Gonna Hurt" and other great tunes. A stand out on the cd is "Amnesia", which was co-written by Jason Matthews. I hope to see this one released to country radio. It's an outstanding song, one that we can all relate to, in that when it comes to relationships, and life in general, sometimes we all just need a little "Amnesia" to get us through. You won't need amnesia to get you through this cd, this is one you'll remember just fine.

You can order the cd on George's website at www.georgeducas.com and at various online retailers. Don't forget to leave a review if you purchase it on Amazon or other online outlets.