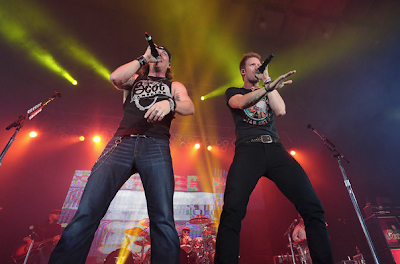 I just have to start this off with WOW! I've seen Florida Georgia Line perform quite a few times, starting from small bars with maybe 50 people to medium sized crowds to this current headlining sell out tour of thousands in attendance and it's CRAZY to see how far they've come in the 3 short years we've promoted them. Insane but well deserved. Brian Kelley and Tyler Hubbard are two of the hardest working, dedicated artists out there, the entire band is. It's so great to see these guys work together as a group and not just as "the singers" and "the band". They are a family and it's evident everywhere they go. Fans out there know every member of this band and when they come to see Florida Georgia Line, they are coming to see an amazing group of musicians. Their shows are always a feel good party and that's exactly what this show was, but on a whole other level. When it come to their stage show and keeping an audience on their feet and their attention, it's hard to not appreciate their level of entertainment and performance. Seeing everyone sing every word and the fan interaction was honestly very humbling.

The NC State Fair has always been top notch at pulling in some of country's best acts (Garth Brooks, Patty Loveless, Clint Black, Travis Tritt, Alan Jackson, Trisha Yearwood, Waylon Jennings, George Jones, Trace Adkins, Toby Keith, Merle Haggard, Willie Nelson, Brad Paisley, and Loretta Lynn just to name a few who have performed in past years). They did it again this year by booking a sell out crowd for FGL. They sold out in less than 5 minutes. The arena holds 4,000 and there were over 10,000 in the online ticket queue before sales started at 10am. When the bus pulled into the fairgrounds, they couldn't even back in because of the crowd wanting to get a glimpse of the band. I'm telling you, fandemonium at it's best and worst. There were women trying to get the roadies to let them on the bus, more than you can count, and guys pretending to be road crew and telling these women to come back after the show! Great job roadies for keeping them both in check! The meet and greet went smoothly, probably smoother than most. The guys were smiling and more than happy to chat, thank fans for their support, and take pictures. Despite their CRAZY schedule and hardly having any free time at all on this night, they made it a point to save what they could to interview with us and be able to show fans their thanks on video. It was literally less than 3 minutes, but they were more than happy to do it and to be honest, that speaks volumes to me. I've been turned down for interviews by artists that aren't doing as well in the charts, shows aren't sell outs, and are told "their schedule won't allow" and then turn around and see them either by the stage during the opener flirting with women or standing around outside tipping back beers. These guys are the hottest thing in country, had less than 20 min before hitting the stage to a crowd of thousands and STILL made time for us. This is just part of why we love them.


The stage set up was great! Such a huge change from a couple of speakers and amps to a ramp, drums on the risers, a kick ass light show and even more band members! When the opening music started, people were already on their feet and the screaming was nearly deafening! I felt like a kid at my first concert. My heart was racing, my feet tapping and it's not that I was just excited to see these guys again, it's that I was anxious to see the growth and progression from the last small show I attended. I was ready to see FGL in their new element. There were all ages in this audience, from maybe 3 years old to 75 and they were ALL ready for just a good time and that's exactly what they got. The set list was the track listing from their top selling cd, "Here's to the Good Times" and their rendition of the Alabama hit, "I'm In A Hurry and Don't Know Why". People were smiling, dancing (some good, some not so good ... LOL), and just enjoying the night and that's such a great thing to see. Little girls were screaming and crying, little boys were imitating every move that Tyler and Brian were making on stage, there was a lot of audience air guitar (thanks Brian Bonds for that!), and hands in the air the entire 13 song set. The guys didn't even take a break! The energy in that room was astounding and the energy coming from the stage was impressive. By the time the last song rolled around, "Cruise", you couldn't hear yourself think because of the applause, singing and screaming. As far as a quality arena show goes, this was top shelf. There was nothing left undone, unsaid or left out. The lighting was great, the sound was great (the best that arena's probably ever had) and when it was over, I wanted more and that's what a great show should do, leave you wanting more. If you are lucky enough to get tickets to one of their shows on this tour, it's well worth it. I'll go out on a limb and say it's the best show I've seen all year. I said that about another show by another artist earlier this month, but this show moved that show down a rank. Great times with great people!
Posted by LovinLyrics at 8:20 PM