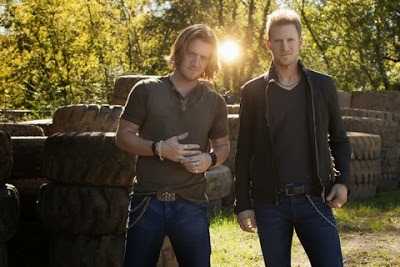 The talented “tag team” has been racking up several awards’ show nominations, including seven fan-voted American Country Awards and four fan-voted American Music Awards, and will perform on both upcoming shows. FGL has previously taken home multiple ACM, CMA and CMT Music Awards and garnered several TEEN CHOICE nominations. In the midst of their first major headline dates – HERE’S TO THE GOOD TIMES TOUR 2013 – FGL will release HERE’S TO THE GOOD TIMES…THIS IS HOW WE ROLL, a deluxe version of their chart-topping PLATINUM debut album, on Monday, November 25.

Monday Night Raw is the longest-running, weekly episodic program in U.S. primetime TV history and is the most-watched, regularly scheduled, year-round program on cable, airing live every Monday night, 52 weeks a year. Fans can get in on the action by using the official hashtag #RAWCountry.
Posted by LovinLyrics at 1:25 PM