KELLY CLARKSON RAISES OVER $106,000 FOR MUSICIANS ON CALL NASHVILLE

Kelly Clarkson Helps Raise Over $106,000 for Musicians On Call in a Record-Breaking, Sold-Out Sixth Anniversary Celebration 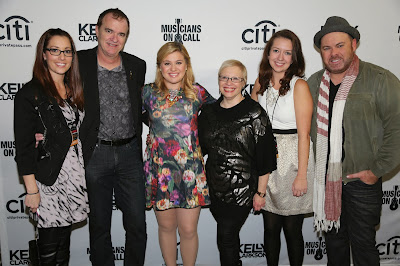 NASHVILLE, Tenn. - On Thursday, Nov. 14, Grammy award-winning artist Kelly Clarkson helped Musicians On Call (MOC) Nashville raise over $106,000, making it the highest-earning single event ever for the branch. In a rare, intimate setting for the superstar, Clarkson performed to a sold-out crowd at Hard Rock Cafe in downtown Nashville for the MOC Nashville sixth anniversary party presented by Citi.

“When I first learned about MOC, it appealed to me for so many reasons," shares Clarkson. "I love how it creates opportunities for musicians to play for kids and bring music to the families who are spending their time, especially during holidays, in the hospitals away from the comfort of their homes.”

Clarkson lit up the room with her characteristic charm and to the delight of all concert-goers, she incorporated fan-favorites "Since U Been Gone," "My Life Would Suck Without You," "Stronger" and "Behind These Hazel Eyes" in the show, as well as new selections from her latest Christmas album, Wrapped In Red. Wrapped In Red features holiday classics "Have Yourself A Merry Little Christmas," "Silent Night," "Baby It's Cold Outside," Clarkson's title track, "Wrapped In Red," plus more originals. Clarkson brought the holiday spirit alive with her Christmas tracks, and delivered a dynamic set true to her genuine and powerful vocal performance reputation. 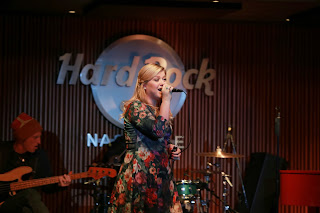 In addition to generously giving her time and talent, Clarkson donated her 2012 American Music Awards performance dress to Hard Rock Cafe for display in its world-famous memorabilia collection in exchange for a $9,000 contribution to MOC Nashville.

"This is by far the biggest event to date for Musicians On Call Nashville," said Dana Sones, MOC Nashville's Program Director. "We are beyond grateful to Kelly Clarkson for donating her time and talent to help celebrate our sixth anniversary. This event not only celebrates how far we've come in six short years, but allows us to expand our programs to bring music to even more individuals in the years to come."

The event offered a VIP cocktail reception and open bidding on auction items throughout the night on autographed collectibles from Tim McGraw, Blake Shelton, Taylor Swift, Nashville Predators players, Tennessee Titans players and more, plus destination vacation packages and tickets to some of Nashville's most popular attractions. 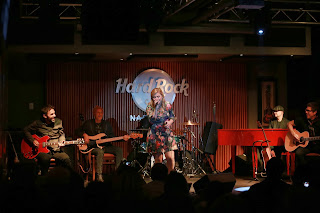 Since expanding into the Nashville community in April 2007, the local MOC branch has grown to support twelve weekly programs within seven area healthcare facilities and its volunteers have played for more than 70,000 patients, family and staff. All of the proceeds raised from the sixth anniversary party stay in Middle Tennessee and go directly to MOC Nashville and its continued mission to deliver live and recorded music to the bedsides of patients in healthcare facilities.

Posted by LovinLyrics at 4:22 PM