FLORIDA GEORGIA LINE RELEASES DELUXE EDITION OF PLATINUM DEBUT HERE’S TO THE GOOD TIMES…THIS IS HOW WE ROLL, TODAY (11/25) 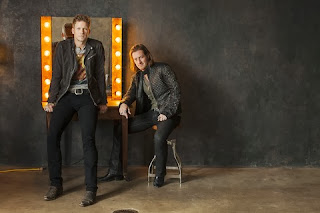 Nashville, TN (November 25, 2013) – Fresh off their American Music Award win for Single of the Year, Florida Georgia Line will release HERE’S TO THE GOOD TIMES…THIS IS HOW WE ROLL, a deluxe edition of their Republic Nashville Platinum-certified debut, today (11/25). The breakout duo will show just how they roll this week with coast-to-coast national TV appearances.

Tonight (11/25), FGL will appear on E!’s Chelsea Lately before heading to the Big Apple for appearances on NBC’s Late Night with Jimmy Fallon (11/27) and Macy’s Thanksgiving Day Parade (11/28). They will conclude the holiday week with a performance of their Top 10-and-rising single, "Stay," on ABC’s Good Morning America (11/29).

They are continuously breaking attendance records nationwide on their first major headline dates – HERE’S TO THE GOOD TIMES TOUR 2013.
For tour dates and more, visit FloridaGeorgiaLine.com.
Posted by LovinLyrics at 1:35 PM