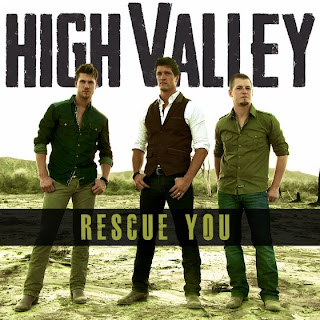 Nashville, TN…(November 19, 2013)… Twenty-something sibling trio HIGH VALLEY are marking their U.S. debut with the release of their very first EP, RESCUE YOU, today on iTunes. The chivalrous title track debuted exclusively on SiriusXM last month and is being spun as an On The Horizon pick on The Highway. High Valley’s Rescue You EP can be downloaded beginning today HERE.

Rescue You features 6 tracks, 5 of which are co-penned by lead singer and older brother Brad Rempel, showcasing the brothers’ seamless harmonies and family values. The project, releasing on Eaglemont Entertainment, is produced by Phil O'Donnel, Seth Mosley, Sean Neff, and Jeremy Spillman.

High Valley recently offered fans a sneak peek of their EP via a live acoustic performance and Q&A on Stageit. All tips from the show benefitted breast cancer care and research at City of Hope.

Brothers Brad (lead vocals, acoustic guitar), Bryan (harmony vocals, bass guitar) and Curtis Rempel (harmony vocals, mandolin), all in their twenties, make up High Valley. The sibling trio initially found inspiration in the music of country music icons Alabama, Rascal Flatts, Diamond Rio and Shenandoah while growing up listening to their older sisters’ records. After sixteen years of touring and opening for the likes of superstars Little Big Town, Alan Jackson, Brad Paisley, Carrie Underwood, Keith Urban and Reba McEntire in their northern homeland, Canadian CMA Awards reigning Interactive Artist of the Year winners High Valley just made their U.S. debut with the release of their EP Rescue You on November 19, wherever digital music is sold! Get to know more about High Valley on Facebook, Twitter and their official website.

Posted by LovinLyrics at 7:05 PM