This Sunday, November 24, 2013, the Whiskey and Cigarettes Country Radio Show will air their newly-recorded second interview with country music star, Steve Wariner. The original air date was postponed due to technical difficulties. 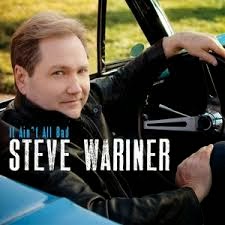 MTS Management Group and Whiskey And Cigarettes Country Radio Show are pleased to announce the airing of DJ Nik Pizzigoni’s second interview with country music superstar, Steve Wariner. The original interview was was scheduled to air on November 10th, but due to technical difficulties, a new interview was necessary. Mr. Wariner is promoting his current album, It Ain't All Bad. The exclusive interview will premiere this coming Sunday, November 24, 2013 between 11am ET-3pm ET. The live show airs on Military Brotherhood Radio at http://www.militarybrotherhoodradio.com and on WDMU Radio at http://www.wdmuinternetradio.com. Whiskey And Cigarettes is also re-broadcast on 38 syndicating stations, worldwide, multiple times throughout the week. The interview will also appear on the December edition of the brand new "Whiskey and Conversations" talk show, which will be available on iheartradio.

"We are very grateful to both Steve and his representative, for being so gracious and understanding," said Michael Stover of MTS Management Group. "They completely understood that technical difficulties do occur from time to time, even in this digital age. So, we thank them from the bottom of our hearts, for agreeing to a second interview on short notice. We are sorry to any of the fans for disappointing them the first time around, but DJ Nik has promised that his second interview is even better than the first. Be sure to tune in!"

Steve Wariner has charted more than fifty singles on the Billboard country singles charts, including ten Number One hits. He has also penned Number One singles for Clint Black and Garth Brooks. Three of his studio albums have been certified Gold by the RIAA, for shipping 500,000 units in the United States. Mr. Wariner is a 4-time Grammy Award winner, a member of the Grand Ole Opry and an inductee to the Music City Walk of Fame. For more information, visit http://www.stevewariner.com.

Whiskey And Cigarettes Radio Show is a weekly show, originating in Milan, Italy, hosted by the “Romeo of the Rodeo” Nik Pizzigoni. The show features a unique blend of classic, current and indie country, trivia, contests, artist spotlights and interviews and Nik’s European charm. http://www.whiskeyandcigarettesshow.com.
Posted by LovinLyrics at 2:57 PM