VINCE GILL TO BE HONORED WITH CRB CAREER ACHIEVEMENT AWARD 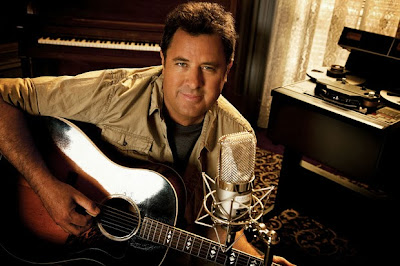 
(Nashville, Tenn. – November 11, 2013) – Vince Gill will be honored with the 2014 Country Radio Broadcasters, Inc. Career Achievement Award at the Country Radio Hall of Fame Induction Ceremony on Tuesday, Feb. 18 at 6 p.m. Emmylou Harris and Rodney Crowell will perform a tribute to Gill as well as presenting him with the prestigious award during the event.

The CRB Career Achievement Award is presented to an individual artist or act that, through their creativity, vision, performance or leadership has made a significant contribution to the development and promotion of country music and country radio. Previous winners of this award include Dolly Parton, Brooks & Dunn, Merle Haggard and George Strait. "Vince Gill is unquestionably one of the greatest artists in the country genre,” said Bill Mayne, Executive Director of CRS. “His body of amazing work continues to evolve, and his performances inspire us all. He is a remarkable ambassador for Country music with his talents, grace, class, leadership, humility, humanity, style and wicked sense of humor. We are very proud to present Vince with this richly deserved honor."

Country Radio Seminar is an annual convention designed to educate and promote the exchange of ideas and business practices in the Country music industry, with specific emphasis on issues relevant to Country radio. CRS 2014 will be held Feb. 19-21, 2014, in downtown Nashville, Tenn., at the Nashville Convention Center. The regular rate of $499 is now in effect. The on site registration rate will be announced closer to the event. Visit www.CountryRadioSeminar.com for more information.
Posted by LovinLyrics at 12:25 PM