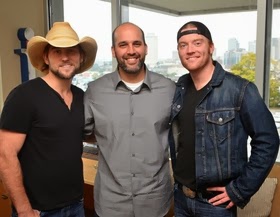 “McKenzies Mill has been on our radar for a while, but over the years we’ve really enjoyed watching their career build,” says Jonathan. “We’re excited to be a part of their team and look forward to 2014 with the release of their debut single “Kickin’ It.’”

A double shot of wins created a series of opportunities for the duo. Justin and Ryan joined Brad Paisley, The All American Rejects and the Far East Movement on the line up at the Bud Light Port Paradise Music Festival after taking the grand prize in a fan voted contest sponsored by Bud Light, Facebook and Sonicbids.

The duo also entered a battle of the bands sponsored by MGM Grand, Country Jam, Crown Royal, Toby Keith’s I Love This Bar and Grill and Roper Apparel. Fighting through three rounds of hopefuls, the duo traveled to Minneapolis and Dallas for the competition. ”We were kind of behind the eight ball in Minneapolis with an early time slot, but thankfully we were able to overcome that and advance to the finals,” recalls Ryan. The grand prize win in Dallas secured the duo performances at the NFR Rodeo Finals in Vegas. Located at the luxurious MGM Grand, McKenzies Mill performed at an event featuring hit makers like Chris Young, Rodney Atkins andDavid Nail. In addition to the Vegas performances, they played the main stage at Country Jam in both WI and CO and received a $10,000 shopping spree courtesy of Roper Apparel. “It’s definitely been a roller coaster ride for us,” says Justin. “We look forward to seeing our fans and making new ones on the road.” 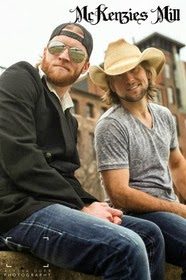 Posted by LovinLyrics at 5:46 PM