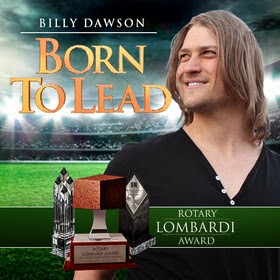 Nashville, TN (December 10, 2013) - Rising country music star Billy Dawson and legendary NFL football coach Vince Lombardi never met but they both acknowledge the power of leadership in success and recognize the importance of “leading the pack.” With Lombardi’s legacy as their inspiration, songwriters Dawson, Amy Jack and Gannon Adams, penned “Born To Lead,” as an inspirational anthem that motivates followers to become leaders. The songwriters echo Lombardi’s sentiments with the line “it’s not the size of the dog it’s the size of his fight”.

“It’s such an honor to co-write and record ‘Born To Lead’ for the iconic Lombardi awards,” says Dawson. “We were all born to lead but only some step into that position and become a positive influence to everyone around them.”

The video, filmed in Nashville at LP Field, features a performance by Dawson and profiles each of the Lombardi Award finalists. This year’s finalists include Anthony Barr (UCLA), Aaron Donald (Pittsburgh), CJ Mosley (Alabama) and Michael Sam (Missouri).

Dawson adds, “I am honored to be involved with such a great organization and excited to work with Mr. Spencer Tillman, a man of great integrity that is the true definition of being a born leader.”