Personal Note: Keep an eye out for Brandy Clark in 2014. She was overlooked in 2013 but that's gonna change this new year. She has one of the best female voices in country music, the attitude and her songwriting abilities are amazing! We highly recommend her cd, "12 Stories", one of the best cd releases of 2013. Brandy Clark is #OnetoWatch. 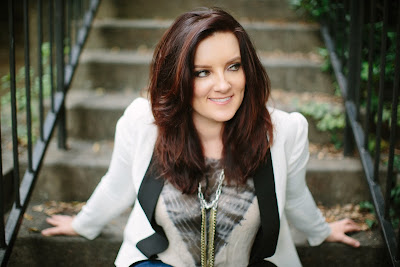 Brandy Clark came to Nashville from Morton, Wash., where she watched her grandmother smoke on the front porch as Mount St. Helens erupted a short ways away, and later worked in a fencing mill. Her love for Patsy Cline, Merle Haggard and Loretta Lynn, coupled with her perceptive observations of everyday characters, fueled her ascension as a songwriter. Two No. 1 hits — The Band Perry’s “Better Dig Two” and Miranda Lambert’s “Mama’s Broken Heart” — are Clark co-writes, along with Kacey Musgraves’ “Follow Your Arrow” and “It Is What It Is” and songs picked up by Sheryl Crow, Kellie Pickler, Reba, Darius Rucker and Kenny Rogers.

What’s surprising is why she waited until now to step forward as a performer. Throughout 12 Stories, produced by Dave Brainard and released by Slate Creek Records, Clark gets deep inside each lyric with an understated but tuneful delivery; sometimes ironic, sometimes laconic, she lets the tales speak vividly for themselves.

Her first single, “Stripes” (written by Clark, Matt Jenkins and Shane McAnally), recounts the protagonist’s decision not to blow away her dimwit boyfriend because “I don’t look good in orange and I hate stripes,” told to the twang and gallop of a spaghetti Western soundtrack.

Every other track is a gem too. It’s not necessary to single any of them out; taken individually and as a whole, they confirm that as long as Brandy Clark is around, poetic narrative in the finest tradition of country songwriting will endure.

TOP ALBUM ON YOUR PLAYLIST

“A random compilation of sad songs.”

WHAT YOU SING IN THE SHOWER

WORD YOU SAY OVER AND OVER

WHAT YOU’D BE IF NOT A MUSICAL ARTIST