CD REVIEW: "THE WOMAN I AM" - KELLIE PICKLER 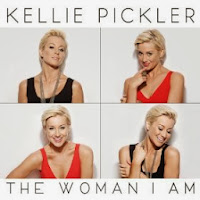 Kellie Pickler is one of the best and most recognizable, unique female voices in country and by far one of it's most vibrant personalities, why she hasn't been recognized as such by country radio, well the industry in general to be honest, is a mystery to many. Hopefully this is the album that will change that and give her the acclaim she deserves.

"The Woman I Am" is more than another new release for Kellie, it's a 12 track love story of her life, her deep rooted love for country music, her strong love of family and her personal love for who she is. There is obvious growth in this release, a maturity and depth that come with time and this is Kellie's time. After 2 cds that just didn't really do her justice, she decided to change things up a little on her last release, "100 Proof", put her twang, southern gumption, confidence and backbone into her music and prove that she's more than the "minx" that Simon Cowell described her as being on American Idol and being more than the typical blonde country singer wanna be that some seem to perceive her to be. She shows that she can stand on her own as a serious artist and she's done just that. Kellie showcases 100 proof vocals and makes it known that not only is she is an artist to be reckoned with, she's just downright "Tough". 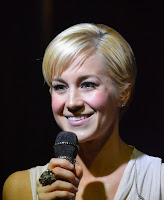 Our picks for stand out songs on this cd are: the seductive "Someone Somewhere Tonight" (the video features her Dancing with the Stars partner, Derek Hough), the sassy "Ring for Sale" about her payback to the guy who did her wrong, her truthful tribute to her grandmother "Selma Drye", her personal proclamation and title track, "The Woman I Am" and the boot stompin' feel good "No Cure for Crazy" ...

The cd is available at most retail outlets as well as iTunes and Amazon.
Posted by LovinLyrics at 10:25 PM