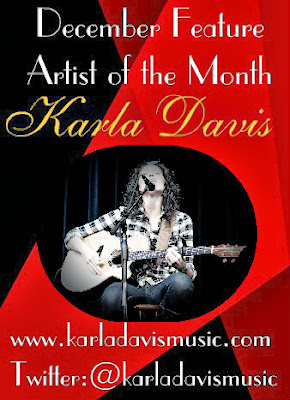 Let me introduce you to Karla Davis, our feature artist for the month of December ...

Karla Davis, a former soccer player for the University of North Carolina at Greensboro, a contestant on Season 2 of NBC's hit series "The Voice" and singer songwriter from Monroe, NC may be a small name but her voice is huge and her talent immense.

I had the pleasure of seeing her on a side stage at Rapids Jam in Roanoke Rapids, NC in 2011 and again a couple of weeks ago in Sanford, NC when she opened for Mark Wills at the Temple Theatre. I was completely stunned and mesmorized by the power and clarity in her voice, the amount of control she possesses, and the wide range. I was also impressed by the depth of her songwriting. There is no wading in the shallow water when Karla writes a song, she jumps right in the deep end. Her songs are written from experience, from situations, from a sense of humor and most of all, from her heart. Karla also is a great entertainer, doing so much more than just sitting and strumming a guitar. She's a storyteller, injecting humor into her performances and strives to include audience interaction. If you get a chance to see her perform, please take that chance.

For her full bio and more insight, go to www.karladavismusic.com

You can purchase Karla's music on iTunes and Amazon.