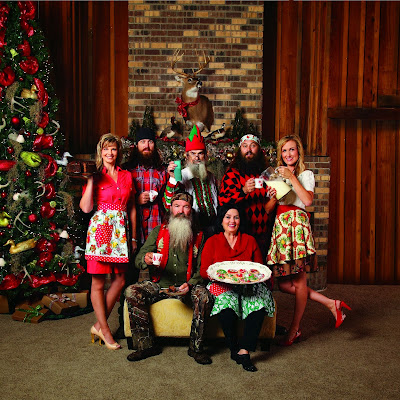 It’s nearly impossible to turn on the television or visit any Walmart, Books-A-Million or Bass Pro Shop without encountering images of the bearded Robertson clan from A&E’s “Duck Dynasty.” It’s the No. 1 nonfiction show in the history of cable television.

Where could they possibly go from here? To Nashville, of course, to make their recording debut.

On Oct. 29, EMI Records Nashville released Duck the Halls: A Robertson Family Christmas. The album features members of the Robertson family singing classic holiday tunes as well as originals, including “Ragin’ Cajun Redneck Christmas,” written by Dallas Davidson and Willie Robertson, the CEO of Duck Commander, the duck-call business that has made them multimillionaires.

Thanks to the popularity of any product associated with “Duck Dynasty,” a number of labels wanted to land Duck the Halls. “We felt really awesome to be able to sit down with every company, talk to them and get a feel for who they are and decide who we wanted to go with,” said Korie. “It’s a real honor to us to be able to do that. We’re people with heart, and we go where it leads us. We sat down with Universal and it just felt right. It felt like they were speaking our language. We all looked at each other — it was Willie and I and Jase and Missy went up there — and at the end of the day said, ‘That’s who we feel gets us and gets who we are.’”

Because the Robertsons were busy filming the next season of their show, most of Duck the Halls was recorded at Music City Studios in their hometown, West Monroe, La. Missy helped corral the family and taught them their parts for the group sing-alongs. It helped that they’ve always sung in their local church and were used to singing harmony.

“It was so much fun,” Missy remembered. “That’s my element. I’ve taught kids for so long. The first song we did together was ‘Silent Night.’ We wanted four-part harmony, so I said, ‘I’ll try to get everyone started, and then we can all sing like we do at church.’ I ended up standing in front of them and directing them, like a choral director. They couldn’t all see me, so they brought me a chair. I was like, ‘This is definitely working for me. I’m standing on a chair in front of my family and they are having to watch and listen to me.’ That was a pretty wonderful experience.”

“Missy is obviously a really good singer,” said producer Buddy Cannon. “I leaned on her a lot because the whole family respects her singing ability and her knowledge, so I relied on her to help me coordinate with different people as far as who was going to be in the studio at what time and who would do which parts the best.

“Willie was a bit nervous at first when he came in to do his vocals,” the producer continued. “But once he got in there and sang it a few times and realized I wasn’t going to kill him or make it difficult for him, he got into it and started having fun. I was the same way with all of them. They didn’t know what to expect. Those guys never dreamed of being singers and making a record. Phil kept coming up and he’d say, ‘You really believe you are going to make Country singers out of us?’”

Cannon’s goal was to represent the Robertsons the same way the hit TV show does. “What I decided I needed to do was not to try to make a perfect record, but to try to make it believable to all their fans,” he said. “When we were working, it was like I was sitting in the middle of one of their shows the whole time. No matter who, no matter which of the characters, was in the studio, it was like it was transported into one of their shows. It was a hoot.”

Everyone involved knows that some skeptics question whether a hit TV show can spawn a hit album, but Jase believes they’re in for a surprise. “Hopefully, they’ll listen to it and say, ‘They can actually sing too,’” he said, with a laugh. “We’re just like we are on TV. We don’t consider ourselves celebrities or stars. That’s just not the way we roll.”