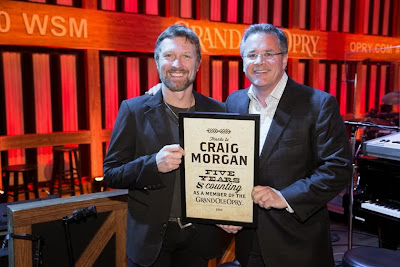 Opry Vice President and General Manager Pete Fisher presented the Opry member with a commemorative print marking the five-year mark and said, “Opry members are the heart and soul of the Grand Ole Opry. They are the reason we have been around for 88 years and are the world’s longest running live radio show. During this Thanksgiving week, we thought it be appropriate to thank Craig Morgan for five incredible years as a member and you are going to be around for several decades more I think. We’ll be doing this a lot more so let’s thank Craig Morgan for five years.”

Upon accepting the print, Craig shared, “I wore them out when I first started as a singer. For me there’s no greater honor that can be bestowed on a country singer aside from being a member of this great foundation. I’m so proud and honored to be here tonight.”

Craig was inducted as an Opry member in October 2008 by Opry member, John Conlee.

Posted by LovinLyrics at 7:27 PM